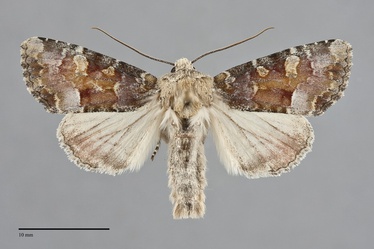 Oligia rampartensis is a very attractive, multicolored medium-sized moth (FW length 15–17 mm) that flies on both sides of the Cascades during the summer. It has dark red, violet, and yellow forewings and an off-white hindwing. The outer margin is lightly scalloped. The ground color is dusky-red, slightly mottled with yellow. The costa is gray-ochre in the basal and terminal areas and dark gray to powdery purple elsewhere. The subterminal area is dark gray on the costa and mixed dark red and violet elsewhere, pale violet at the posterior margin. The terminal area is ochre at the apex, mottled ochre, red, and gray elsewhere, darkest red or gray opposite the cell and in the fold. The fold is darker in median area, especially distally. The lines are gray or dark red, partially double.  The basal line is filled with yellow, evident on the costa. The antemedial line is filled with gray on the costa and ochre to white elsewhere, slanted slightly toward the outer margin and weakly zigzagged on the veins. The median line is gray on the costa and red near the trailing margin. The postmedial line is scalloped, filled with ochre or violet around the end of the cell where it is nearly straight and perpendicular to the costa, dark gray and white on the posterior wing where it is perpendicular to the trailing margin. The subterminal line is light yellow, offset below the apex and slightly irregular elsewhere. It is preceded by a red shade opposite the cell and in the fold. The terminal line is black, thicker between the veins. The fringe is checkered dark gray and ochre or light gray. The orbicular and reniform spots are partially outlined in thin gray and yellow, slightly darker centrally. The orbicular spot is round. The reniform spot is broadly kidney-shaped to oval and contains a gray spot at the its posterior end. The red-rimmed claviform spot varies from absent to weak, and it is filled with either the ground color or ochre. The hindwing is off-white with red suffusion in the marginal area and a light gray submarginal band. A dark terminal line is present. The fringe is white with a partial gray basal row. The head and collar are light grayish yellow speckled with black scales. The posterior thorax and abdominal segments bear dark tufts. The male antenna is weakly biserrate.

This species can be identified by its dark red and multicolored forewing in combination with the off-white hindwing. Oligia violacea is nearly identical except for a white hindwings. The forewing of O. rampartensis is slightly darker with a more yellow tint that is only apparent when specimens of these species are compared side-by-side.

This species is widely distributed throughout much of western North America in lower elevation wetland habitats, including the edge of freshwater and brackish marshes, lakes, and along the riparian zones of creeks and rivers.  It tends to be uncommon.

Oligia rampartensis is widespread with widely scattered records from both sides of the Cascade Mountains as far north as southern British Columbia. It reaches as far north as Lillooet in the southwestern part of the province and just north of the border in the southeast corner. It is most commonly collected in mountains near arid lands in much of our area.

This species is more widely distributed in the West than its sister species O. violacea. It ranges from central Alaska and southern Alberta to Colorado and California.

This species is a foodplant specialist that bores into the stems of rushes (Juncus spp.) in the Juncaceae.

The flight period of this moth is the summer, usually in July and August. It is nocturnal and comes to lights.