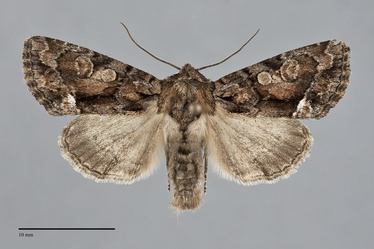 Oligia divesta is a common, small to medium-sized moth (FW length 13–18 mm) that flies on both sides of the Cascades during summer and early fall. It has a mottled gray and wine-red forewing with a complex pattern that includes basal and median dashes, large, light gray orbicular and reniform spots, and a white segment of the postmedial line at the posterior margin. The outer margin of the forewing is lightly scalloped. The ground color is mottled light to medium-dark gray with a variable wine-red flush on the wing base, in the median area posterior to the cell, and in the mid-subterminal area. A short black basal dash is also present, and there is a similar mark near the posterior margin proximal to the antemedial line. Dark gray is present in the terminal area opposite the cell and in the fold, in the subterminal area at the W-mark of the subterminal line, and near the median dash. The basal, antemedial, and postmedial lines are dark gray, partially double filled with the gray ground color except for a white segment of the posterior postmedial line. The basal line is evident on the costa. The antemedial line is slightly irregular, greatest near the posterior margin, and is angled slightly toward the outer margin. The median line is dark gray, angled across the costa and posterior margins and absent elsewhere. The postmedial line is lightly scalloped, drawn sharply toward the base on the costa, and curved near the costa to run across the distal wing at a slight angle toward the base. The subterminal line is irregular pale gray with a weak W-mark on the mid wing on M3 and CuA1. It is preceded by strong black wedges between veins on the mid-wing and indistinct black spots in the fold. The terminal line is a series of black triangles, extended to the subterminal line opposite the cell and in the fold. The fringe is checkered light and dark gray. The orbicular and reniform spots are partially outlined in dark gray to black. The orbicular spot is moderately large, round, filled with light gray to nearly white. The reniform spot is broadly kidney-shaped, usually lacking an outline on the lateral side, filled with slightly darker light gray than the orbicular spot and an indistinct dark gray inner line parallel to the outline. The claviform spot is variable, often absent, dark gray to black, small to moderate-sized. The hindwing is pale gray with a slightly yellow cast, darker gray discal spot, postmedial line, marginal shade, and thin terminal line. The hindwing fringe is light gray with a gray median line. The head and thorax are powdery gray with a variable wine-red tint, black transverse line on the collar, and dark edges on the tegulae. Weak tufts are present on the posterior thorax and several abdominal segments. The male antenna is biserrate.

This species can be identified by its gray and claret color, black median dash, round pale orbicular spot, and the white segment of the distal postmedial line near the anal angle. Oligia tusa, a species that occurs near the Pacific Coast, is also gray and claret, although significantly darker than O. divesta. It lacks the median dash and white in the lines. Hyppa contrasta, has similar pattern elements of a thick median dash and white segment of the postmedial line. It is a larger with a more elongate forewing. Its anterior and basal wing is more uniform gray than that of O. divesta, and the lateral tegulae are dark brown and black unlike those of O. divesta which are similar to the rest of the thorax.

This species is geographically variable in the Northwest. The populations from the western parts of the region are more vividly colored than those from east of the mountains.

The type locality of the synonym Chytonix laticlava Smith is Washington, Pullman.

This species is widely distributed throughout much of western North America in moist forest and grassland habitats.  In the Pacific Northwest, it is particularly abundant in coastal rainforests, wet grasslands, and in mixed hardwood forests at low elevations, but it is also common in moist forests and in riparian zones along creeks and rivers east of the Cascades.

Oligia divesta is widespread in the Northwest, occurring on both sides of the Cascade and Coast Ranges. The range extends north at least to south-central British Columbia. It also occurs in the mountains of southeastern Idaho but appears to be absent from the dry southern parts of eastern Oregon and Idaho.

This species is found near the West Coast of North America. It is widespread in California to the border with Mexico.

This species is a foodplant specialist that bores into the stems of coarse grasses (Poaceae).

The flight season of O. divesta is summer and early fall. It has been collected from late June through September with a peak in August. This species is nocturnal and comes to lights.