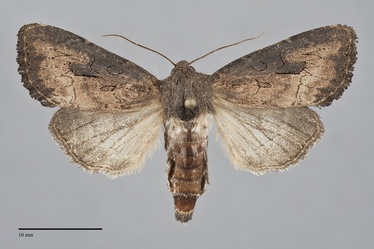 Macronoctua onusta is a large, brown and smoky dark gray moth (FW length 18–21 mm) that has been introduced into the Vancouver area but might not be established in the Northwest. The forewing is broad with a scalloped outer margin and has a black streak along the reniform spot. It is dull brown with broad smoky dark gray suffusion on the costa and in the cell as well as in the terminal area and fringe. The antemedial and postmedial lines are thin, dark gray. The antemedial line is drawn far lateral above the posterior margin. The median line is dark brown, strongly arched toward across the brown median area below the cell. The postmedial line is jaggedly zigzagged on the anterior wing and straight from CuA1 to the posterior margin. The subterminal line is only evident as the transition from the brown subterminal area to the black terminal area. The terminal area is a black line. The three spots are outlined in thin black. The orbicular spot is a small oval. The reniform spot has a darker posterior outline which forms a straight black line below the cubital vein. It is large and asymmetrically kidney-shaped with the lower end curved toward the outer margin and touching the postmedial line. A spike-like process extends toward the base from the posteromedial end. The claviform spot is small and elongate with a rounded end. The hindwing is dirty brown-gray with slightly darker discal spot and veins, and scalloped terminal line. The hindwing fringe is light gray with a brown base. The head and thorax are even smoky dark gray. The male antenna is broad and bead-like.

This species is widely distributed in eastern North America in wetlands and urban habitats with cultivated irises (Iris spp., Iridaceae). The only known occurrence of this moth in the Northwest is in a suburban garden outside of Vancouver and is likely to be an introduction from the East.

This species is found in eastern North America from southern Canada to South Carolina and Georgia. The western limit of its range is in the North-Central States near the Mississippi River.

This species is a foodplant specialist that bores into the rhizomes of irises (Iris spp.) in the Iridaceae.

Adults fly in the fall, usually in September and October. It comes to lights, although not particularly well. Forbes (1954) comments that the moth is best obtained by rearing.

This species can be pest of cultivated irises.