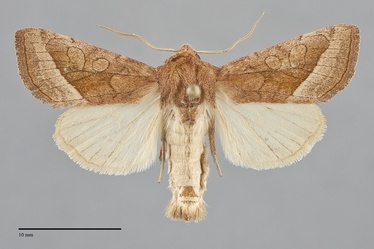 Hydraecia perobliqua is an uncommon, medium-sized moth (FW length 13–18 mm) that flies in desert wetlands during late summer. It has an orange-brown forewing with thin spots, zigzag antemedial line, and a pale distal area demarcated by a nearly straight postmedial line. The forewing color is nearly even orange-brown from the base to the postmedial line, subtly darker in the median area below the cell. The distal wing is paler, light gray-tan abutting the postmedial line and darkening slightly toward the outer margin. A small triangular patch on the costa preceding the subterminal line gives the impression that the postmedial line continues to the apex although it curves toward the base on the costa. The basal and antemedial lines are a dark shade of the ground, partially double and filled with the ground color. The basal line is faint on the costa. The antemedial line is darker, sinuous with three lateral bulges, one large on the mid-wing and two smaller near the margins. The median line is slightly darker than the ground, angled 90° at the reniform spot, faint but usually visible from the costa to the spot and below the cell. The postmedial line is darker than the other lines, single and smooth, sharply drawn toward the base on the costa, a short straight segment toward the outer margin from just below the costa to vein R5, then bent 90° toward the base and nearly straight from there to the posterior margin. The subterminal line is pale, faint, slightly offset below the apex and slightly sinuous elsewhere. It is preceded by a faint shade, darkest on the costa as described above. The terminal line is smooth, similar in color to the postmedial line. The fringe is similar to the ground color. The hindwing is pale yellow, including the fringe with slightly darker veins. The head and thorax match the forewing color, with a weak median crest on the anterior thorax. The male antenna is strongly biserrate with a wide central shaft.

This species can be identified by its two-toned orange-brown forewing with straight pale subterminal band bordered by the postmedial line, dark-rimmed forewing spots filled with the ground color, and immaculate pale yellow hindwing. It is most likely to be confused with Hydraecia medialis, but this species is usually larger and pale tan shaded with gray on both wings. Its forewing spots are pale-filled unlike those of H. perobliqua.

Hydraecia perobliqua is restricted to wetland habitats around marshes, lakes, and in riparian zones along creeks and rivers within low elevation steppe environments east of the Cascades. It appears to be relatively rare.

This species has been found in the dry interior of the Northwest as far north as the southern Okanagan region of British Columbia. It occurs in the Columbia Basin of Washington, in far-eastern Oregon, and on the Snake River Plain in southern Idaho.

Hydraecia perobliqua flies on the Great Plains from central Alberta to Colorado and Minnesota. It has also been found in southwestern Ontario near Lake Nipigon. It does not occur south of our region west of the Rocky Mountains.

No information is presently available regarding the larval biology of this species, but it probably bores into the stems of herbaceous plants like closely related species.

The flight season of H. perobliqua is late summer, usually in July and August in the Northwest. A few specimens have been collected during September. It is nocturnal and comes to lights. This species does not wander far from its wetland habitat.