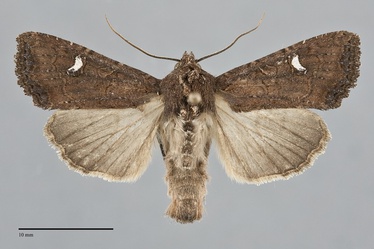 Helotropha reniformis is a dimorphic, medium-sized moth (FW length 15–19 mm) that flies in wetlands throughout the Northwest during the summer and early fall. The forewings of one form are uniformly dark reddish-brown with a white or ochre reniform spot, and the other common form is mottled, with a tan subterminal area, and has lace-like white reniform spots and adjacent veins. The forewing margin is weakly scalloped. The darker form is dark purplish brown or red-brown with darker purplish gray terminal area and white or ochre-filled reniform spot. The dark lines and other spots are relatively obscure. The lighter form has similarly colored but more mottled color from the base to the postmedial line, and similar gray terminal area, but a pale tan band extends from the apex and all but the most anterior subterminal area to the posterior margin. A black median dash often connects the antemedial and postmedial lines in the fold, and a similar dark line is present near the posterior margin at the base. Some specimens have a weak black basal dash. The basal, antemedial, and postmedial lines are dark brown filled with brown; the posterior segment of the postmedial line is black and white. The basal and antemedial lines are usually indistinct, wavy. The basal line is excurved and the antemedial line is oblique, angled toward the outer margin. The postmedial line is weakly scalloped, sometimes with thin black and pale spots on the adjacent veins, drawn toward the base at the costa and on the radial vein, excurved around the lower reniform spot, then smoothly curved toward the base across the posterior wing. The subterminal line is light tan, sinuous with an offset below the apex and a weak W-mark on M3 and CuA1. It is preceded by a brown shade at the costa and below the cell and powdery black spots on the segments adjacent to the W-mark. The terminal line is a series of black spots between veins. The fringe is checkered black and dark brown. The orbicular spot is ovoid or irregularly angular, outlined in thin black and light brown with dark brown central filling. The reniform spot is kidney-shaped with the lower end elongated toward the outer margin, outlined in thin black, and filled with lace-like white lines that often extend a short distance medially on the cubital vein and laterally across the postmedial line on M3 and CuA1. The claviform spot is brown to black, variable in prominence. The hindwing is pale brown-gray, darker gray toward the margin, with slightly darker gray discal spot and veins, and a dark thin terminal line. The fringe is pale gray-tan with a striped gray and gray-tan base. The head and thorax match the forewing color, with a black transverse line across the distal collar. Weak tufts are present on the anterior and posterior thorax and on the dorsal abdominal segments. The male antenna is bead-like, relatively thick.

Both forms of species can usually be recognized by the dark purplish or reddish brown color and light reniform spot. Specimens with the lace-like or solid white reniform spot are unmistakable. Those with ochre filling of the spot could possibly be mistaken for Aseptis binotata or Apamea cogitata. In the former species the ochre spot is lateral to the reniform spot, not inside it as in H. reniformis. Apamea cogitata is uniform red-brown, much redder than H. reniformis, and lacks a dark gray terminal area.

This species is common and widely distributed throughout much of North America in wetland habitats.  In the Pacific Northwest, such habitats include marshes, the edges of lakes, and the riparian zones along creeks and rivers at low elevations both west and east of the Cascades.  However, it has also been found in bogs at high elevations in the Cascades and Rocky Mountain regions.

Helotropha reniformis is widespread in the Northwest, occurring on both sides of the Cascade Mountains. The range extends as to the Alaska Panhandle near the coast and central interior further inland. It is mostly absent from the dry interior, but has been found in wetlands in parts of the Columbia Basin in Washington and along the Snake River in southern Idaho.

This is a widespread species in North America and is found from the Pacific to the Atlantic. In the West it occurs throughout most of California and has also been recorded from Colorado. It occurs across the Canadian Prairie Provinces and upper Midwest to New Brunswick, ranging south to near the Ohio River and Virginia.

This species is a foodplant specialist that bores into monocots, particularly sedges of the genus Carex (Cyperaceae). Close relatives in Eurasia favor the rootstocks of Irises (Iris spp., Iridaceae).

The flight period of H. reniformis is summer and early fall. Northwest specimens have been collected as early as late June, but the peak flight is in August and early September. It is nocturnal and comes to lights.

This species has been reported as a pest of young corn plants in eastern North America.