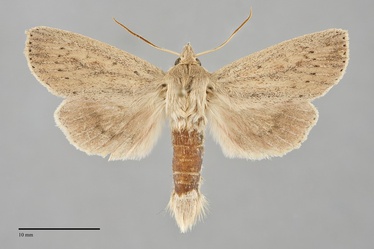 Globia oblonga is a medium-sized  to large powdery tan moth (FW length 17–18 mm in males; 20–21 mm in females) with black dots in the cell and on the postmedial and terminal lines. The ground color is tan, often with a slight orange to yellow cast, powdered with gray scales that is heaviest on the veins and along the margins. A black spot is located at the base of the cubital vein, and two similar spots are present in the cell, one near the base and the other at the proximal third. The postmedial line is faint, strongly toothed with distinct black spots on the lateral tips of the teeth that often are the only visible part of the line. The terminal line is a series of distinct small black spots between veins. The reniform spot is a dark smudge at the end of the cell. The other lines and spots are absent. The hindwing is slightly reddish tan, suffused with gray that is darkest at the diffuse postmedial line. The hindwing fringe is tan off-white. The head and thorax are tan, similar to the forewing ground color, with a forward-directed tuft of scales on the frons. The abdomen is relatively long. The male antenna is biserrate.

This species can be identified by its powdery tan forewing, relatively large size, and pattern of black dots. It is most likely to be confused with Globia subflava, a slightly smaller species that is more orange. Worn females of this species are especially similar but lack the black spots on the terminal line found in G. oblonga.

This species is common and widely distributed throughout much of North America in marshes and other wetlands with permanent water.  This includes the edges of lakes, creeks, rivers, and even irrigation canals in agricultural and urban areas.

Globia oblonga is widespread in the Pacific Northwest as far north as southern British Columbia. It is found on both sides of the Cascades. In the interior it occurs in wetlands in the dry basins. West of the mountains it has been found near the Pacific Coast.

This species is widespread in North America. It occurs south through California, Nevada, and western Arizona from the Pacific Northwest in the West. In eastern North America it is found throughout most of the Eastern United States and southern Canada. There are scattered records from the Canadian Prairie Provinces, but it does not appear to occur in the western Great Plains or Rocky Mountain region.

This species is a foodplant specialist that bores into the stems of cat-tails (Typha spp.) in the Typhaceae.

This moth flies during the summer and early fall. The records from the Northwest span mid-July to mid-September. It is nocturnal and comes to lights. The moths do not fly far from the marshes where they live.