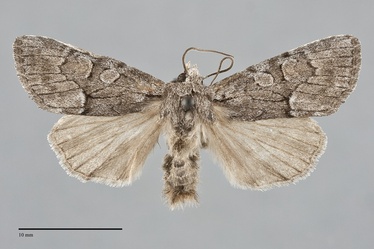 Eremobina unicincta is a medium-sized, pale to medium gray moth (FW length 16 mm) that flies in wet meadows in the mountains of eastern Oregon during the summer. It has a basal dash, a long claviform spot, and a thick curved black and white distal postmedial line. The forewing is even light to medium-dark gray basal to the postmedial line. The distal wing is slightly mottled and often slightly lighter gray, palest whitish gray in the posterior subterminal area, with thin dark veins. A thin black basal dash is often bordered anteriorly by white. The basal and antemedial lines area gray, partially double and filled with the ground color or slightly paler gray, usually very faint. The median line is absent. The postmedial line is gray and light gray on the anterior half of the wing where it is weakly scalloped and square around the end of the cell, thicker black and white on the posterior wing where it is nearly straight to slightly concave toward the base. The subterminal line is pale gray, diffuse or slightly irregular, with a faintly darker preceding shade in some specimens. The orbicular and reniform spots are partially outlined in black and filled with light gray. The orbicular spot is large, oval. The reniform spot is kidney-shaped, weak laterally, reduced to a black arc at the medial end of a pale gray spot in the most extreme specimens. The claviform spot is long and wide, spanning the median area. The hindwing is light gray with a slight tan tint, with diffuse gray postmedial line and marginal band and a darker thin terminal line. The hindwing fringe is pale gray with a darker gray base. The head and thorax are medium gray with an incomplete thin black transverse line across the edge of the collar. The male antenna is biserrate.

This species can usually be identified by the even gray forewing color with simple pattern of black lines and spots that include a long claviform spot and concave black-and-white mark of the posterior postmedial line. It is most similar to Eremobina claudens and might eventually prove to be a regional form or subspecies of it. The forewing is less mottled than in E. claudens, the prominence of most pattern elements is reduced, and the black-and-white segment of the subterminal line that abuts the posterior margin is usually more conspicuous and smoother.

This species is mostly restricted to meadows and bogs at higher elevations in the Cascades, and is usually uncommon or rare.

The Northwest distribution of E. unicincta is the east slope of the Cascades of and Warner Mountains of Oregon.

This is a West-Coast moth with a relatively small distribution. The range extends south to central California.

No information is presently available regarding the larval biology of this species, but it probably feeds on sedges (Carex spp.) in the Cyperaceae like closely related species.

The flight period of E. unicincta is late summer, with a few records from our region in late August. It is nocturnal and comes to lights.