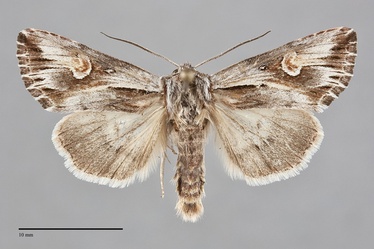 Nedra stewarti is a small moth (FW length 13–15 mm) that flies in two parts of the Pacific Northwest during the spring and summer: a smaller darker population in western Oregon and Washington, and a larger paler on near the Idaho-Washington border and in southern Idaho. It has a streaked light gray and dark brown forewing with a black and white basal dash and a large white-rimmed reniform spot. The forewing ground color is blue gray, heavily shaded with dark brown and dark gray posterior to the basal line, on the anterior and central median area that often extends across the lower subterminal area posterior to the lower half of the reniform spot, and in the terminal area. Thin dark veins and thicker black streaks between the veins are present on the distal wing, strongest lateral to the cell. A long basal dash is white anteriorly and black posteriorly, with the white continuing a short distance into the median area. A short segment of the median line is evident near the posterior margin, and a similar gray shade is present across the costa at the postmedial line. The subterminal line is evident as the transition between the gray subterminal area and the dark terminal area. It extends to the mid-margin as a broad W-mark on M3 and CuA1. The terminal line is a series of dots. The fringe is strongly checkered white and brown. The orbicular spot is a small oval outlined in black and filled with white. The reniform spot is moderately large, broadly C-shaped with a larger posterior end and often a short lateral tooth on M3, pure white with a kidney-shaped red-brown spot off-center towards the anterior end. No claviform spot is evident. The hindwing is pale tan to dark gray, darker distal to the postmedial line, with gray discal spot, an even diffuse postmedial line (not conspicuous in western populations), and a white fringe. The head and thorax are blue-gray and gray-brown, with a black line across the distal collar and brown margins on the lateral tegulae. The male antenna is biserrate.

This species is double brooded in some parts of its range. The spring brood of the western populations is smaller and darker than the summer brood.

Nedra stewarti can only be confused with Nedra hoeffleri in the Pacific Northwest. Nedra hoeffleri is closely similar to the small dark spring brood from west of the Cascades. It flies only at moderate to high altitudes in the Northern Rockies Ecoregion to the north of the known populations of N. stewarti and can therefore be separated from it by locality and habitat.

The Nedra populations from western Oregon and Washington are smaller and darker than those from farther inland in and near Idaho. In fact, these populations were considered to be distinct species when this site was first created. We used the name N. stewarti for the eastern populations and N. dora for the western ones, noting that the correct use of these names was uncertain at the time. Lafontaine & Schmidt (2015) placed the name Nedra dora Clarke, 1940, type locality California, Eldorado County, Grizzly Flats, as a synonym of Nedra stewarti, type locality California, noting lack of consistent differences in appearance, structure, and DNA barcodes. Nedra hoeffleri Clarke has a similar barcode and will probably also be shown eventually to be a dark montane form of the same species.

This species flies in dry open forest and grassland habitats.  In the Pacific Northwest, it occurs in native prairies west of the Cascades and in open ponderosa pine forests and prairies east of the Cascades.  It is usually sporadic, but may be locally common. The eastern populations of this species might have been restricted to moist, open habitats before the introduction of common St. John's wort from Eurasia, but has adapted to drier and more disturbed habitats such as roadsides that this weed favors.

The western populations of N. stewarti occur in a narrow band from the southern Puget Lowland Ecoregion through the Willamette Valley to the Klamath Mountains Ecoregion. The eastern populations of this moth is common in a relatively small region that encompasses eastern Washington, the Blue Mountains of northeastern Oregon, and adjacent northwestern Idaho. It has also been found in south-central Idaho suggesting that it might be more widespread in central Idaho, an area that has been collected seldomly.

The range of this species includes northern California.

The western populations of N. stewarti are found during April and May and again in July. The eastern population has been most commonly collected during the summer, with records from June through August with a significant peak during July. It is at least partially double-brooded as there are a few records from April and May. Nedra stewarti is nocturnal and comes to lights.

None known, although this species could have a small beneficial effect on introduced St. John's wort, a noxious weed.