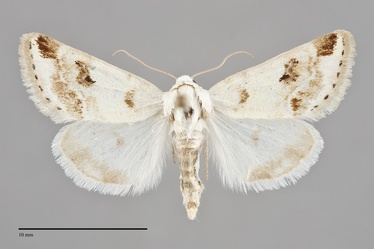 Schinia unimacula is a small (FW length 11 - 12 mm) cream-colored moth that flies in steppe during late summer and early fall. It has a quadrate patch of dark gray-brown near the forewing apex and variable tan and brown markings elsewhere. The ground color is cream to off-white on the base, most of the median area, and the terminal area, and usually light tan from the median line to the postmedial line and basal to the antemedial line. The subterminal area is brown to gray brown, darkest in a trapezoidal patch on the costa between the postmedial and subterminal lines, light on the mid-wing, and gradually darkening from the mid-wing to the trailing margin. The antemedial and postmedial lines are tan, double, filled with the cream ground. The antemedial line is smooth and strongly excurved toward the outer margin with apex at mid-wing. The postmedial line is smooth to weakly scalloped, asymmetrically convex around the cell with the apex of the curve near the costa, then slightly concave toward the base to meet the trailing margin at an oblique angle toward the base. The median line is tan, fused to similar color that extends to the postmedial line. The position of the subterminal line is evident as the transition between darker subterminal to lighter terminal areas. The terminal line is a series of black dots. The fringe is tan off-white near the apex fading to white at the anal angle. The reniform spots is variable, faint gray or tan to dark black-brown with a pale line at the center, weakly figure-eight-shaped with black dots at the anterolateral and posteromedial edges. The other spots are absent. The hindwing is white with faint gray-brown suffusion at the marginal band and a variable discal dot that is absent, pale gray-brown, or gray. The hindwing fringe is white. The head and thorax are white. The male antenna is filiform.

This species can be recognized from other fall-flying steppe species by its small size and pale off-white color with a dark spot near the apex, even though the strength of the other markings are variable in darkness.

This species is moderately common and widely distributed on dry sagebrush steppe at low elevations east of the Cascades.

Schinia unimacula flies in the dry interior steppes of Washington, Oregon, and Idaho in the Northwest.

The foodplant of S. unimacula is rabbitbrush (Ericameria spp., Asteraceae).

Adults fly during late summer and early fall, typically spanning the end of August and early September in our region. It is primarily nocturnal and comes to lights, but it is commonly observed taking nectar at rabbitbrush (Ericameria spp.) in the late afternoon and evening.