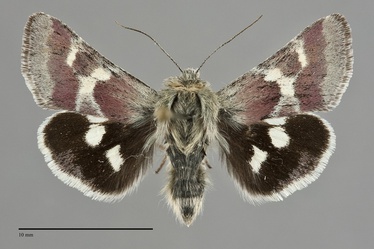 Schinia suetus is a small (FW length 11–13 mm), day-flying moth that flies in dry steppe and forests during spring and early summer. It has a rose-pink to gray-green forewing, a large reniform spot in a cream-colored median area, and a black hindwing with two white spots. The median area is cream with dusty blue-gray along the costa and trailing margin. The wing base proximal to the antemedial line and the subterminal area are variable, even dark rose pink to gray-green or a mixture of the two scale colors. The terminal area is lighter gray than the adjacent subterminal area and the fringe is similar anteriorly and lighter near the anal angle. The large ovoid reniform spot is the same color as the wing base and subterminal area. The lines are only evident as the interfaces between the different colors. The antemedial line is smoothly arced toward the outer margin, nearly forming a half-circle. The postmedial line is nearly straight lateral to the reniform spot, turns medially to touch the lower spot, and is straight across the posterior wing from the lower spot to the trailing margin. The subterminal line is smooth, weakly convex toward the outer margin. The ground color of the hindwing is nearly light cream, nearly white, reduced to two spots lateral and posterior to the black discal spot. The base, inner margin, and marginal band are black, broadly fused to the large quadrate discal spot. The hindwing fringe is white with a black base. The head and thorax are green-gray, sometimes with a slight rose tint. The eye is reduced in size. The male antenna is filiform.

This species is larger than other Schinia species, with which it flies. It can usually be recognized without difficulty by its strong rose pink or pink-tinted green color, cream median area, large reniform spot, and black hindwing with two pale spots.

This species is widely distributed throughout much of western North America on dry prairies and sagebrush steppe at low elevations in the Great Basin region and at middle elevations in the mountains east of the Cascades.  It may be locally common.  There are a few scattered records from the Willamette Valley, Oregon, and glacial outwash prairies near Olympia, Washington. However, these native prairie populations from west of the Cascades may be close to extinction with the loss of this habitat.

Schinia suetus is found from southern British Columbia south through the dry interiors of Washington, Idaho, and Oregon. It is uncommon west of the Cascades but is known from the Willamette Valley in western Oregon and the southern Puget Trough in Washington.

This species is found throughout most of the western United States south of the Northwest and west of the Great Plains.

The early stages of S. suetus have been described by Hardwick (1996). The larva feeds on lupine (Lupinus ssp.) in the Fabaceae.

Adults are diurnal and visit flowers during the day. It flies predominantly during the spring, with records from late April to early July in our region.