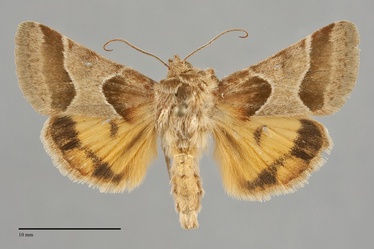 Schinia jaguarina is a small moth but fairly large for the genus Schinia (FW length 13 - 15 mm) that might occur in the eastern part of the Northwest. It has an hourglass-shaped pale median area on the forewing and orange and dark gray hindwing. The median and terminal areas of the forewing are even light grayish tan. The base of the wing and subterminal area are dark brown, darkest near the antemedial and postmedial lines. The basal line is barely evident on the costa. The antemedial and postmedial lines are smooth whitish tan or cream. The antemedial line is strongly arced toward the outer margin with apex on the mid-wing. The postmedial line is S-shaped, weakly convex laterally at the level of the cell and more strongly concave toward the base in the fold. A faint gray median line is present. The subterminal line is wide, faint, and light gray-tan. The terminal line is a series of gray spots between the veins. The fringe is the same color as the terminal area. There are no forewing spots. The hindwing ground color is bright yellow-orange, weakly suffused with gray at the base. The discal spot is variable, usually thick dark gray but occasionally thinner or even absent. The marginal band is sharply-defined medially and contains a patch of the ground color near the outer margin. The fringe is cream with an orange and gray base. The head and thorax are even gray-tan. The male antenna is filiform.

Schinia jaguarina can be recognized by its two-colored forewing lacking spots and orange and black hindwing. It is most similar to Schinia mortua. This species differs in having a distinct dark-filled reniform spot and a wide solid black marginal band on the dorsal hindwing.

This species occurs on native prairies of the Great Plains. Its habitat in the Northwest is unknown. Its known foodplant, Psoralea spp., grows in sand soils.

This species has been reported to occur in the Northwest but no specimens from our area have been examined by us. It would be most likely to occur in southeastern Idaho or southern Oregon based on its global distribution.

Schinia jaguarina is most common on the Great Plains where it occurs from southern Saskatchewan to southern Texas. The range extends east to Florida and the Carolinas, and west through Arizona to southern California. A single record from northwestern Nevada is shown on the Moth Photographers Site.

This species is a foodplant specialist feeding on various species of Psoralea in the Fabaceae.

The flight period of this moth is late spring in most of its range. It should be sought in May and June in our area.