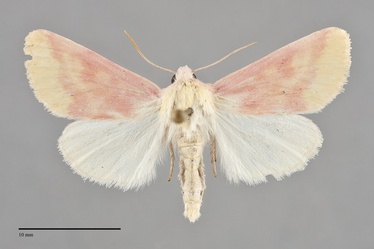 Schinia florida is a small to medium-sized (FW length 14 - 16 mm) beautiful pink and yellow moth that is found in the eastern parts of our region. The ground color of the wing is light yellow, but most of the wing is bright pink darkest in the basal and subterminal areas. The smooth antemedial and postmedial lines are visible as slightly lighter pink, and the orbicular and reniform spots are slightly darker than the surrounding area. The position of the slightly irregular subterminal area is indicated by the transition from pink to yellow. The fringe is yellow. The hindwing is pure white. The head and thorax are pure yellow. The male antenna is filiform.

This species is widely distributed throughout eastern North America in open meadows and on the prairies of the Great Plains.

Schinia florida is rarely collected in the Pacific Northwest. It has been found in the Blue Mountains of southeastern Washington, extreme eastern Oregon, and in the Panhandle and Snake River Plain of Idaho.

This species has a large range in North America. It occurs from eastern California, the Northwest, and central Alberta to South Carolina and southern Canada east and north to the island of Newfoundland.

This species is a foodplant specialist feeding on evening primroses (Oenothera spp.) and Gaura spp. in the Onagraceae.

Schinia florida flies when its foodplants are in flower. It has been collected in July and early August in our region. The moth flies at night and comes to lights. The moths rest on the stalks and inside the flowers of primroses during the day. The yellow color of the distal wing match the petals of the flowers which close around it during the day.