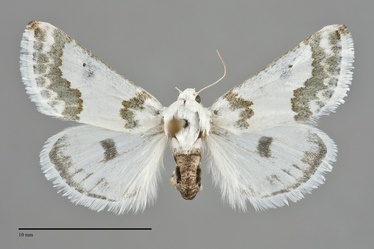 Schinia cumatilis is a small (FW length 12–13 mm), distinctive moth that flies in eastern British Columbia during late summer and early fall. It has silvery white forewings with blue-gray to tan lines on both sides of the wide median area. The forewing color is shiny, nearly metallic, pure white on the median area and the wing base, and slightly blue-gray along the costa. The subterminal area is relatively thin, even tan or blue-gray. A similar width and color band is present medial to the antemedial line. The terminal area is light blue-gray. The antemedial line and postmedial lines are thin and black with tan on the side outside of the median area. The antemedial line is scalloped, and the postmedial line is toothed on the veins. The subterminal line is white and mildly irregular to strongly scalloped, with the teeth reaching the outer margin. The terminal line is black, interrupted by the white veins. The fringe is white with a brown spot at the apex. The reniform spot is a blue-gray smudge and a black dot at the anterior distal cell. The other spots are absent. The hindwing is shiny white, with less lustre than the forewing, with dark gray near the margin that is strongest on the veins and a dark terminal line. The hindwing fringe is pure white. The head and thorax are white. The male antenna is filiform.

This species is unmistakable due to its silvery white forewing and dark lines on the basal and distal wing. The only other moths with similar forewing color are some members of the subfamily Acontiinae. All of them lack the transverse banding that is present on the forewing of S. cumatilis.

This species is widely distributed on the dry short-grass prairies of the Great Plains.

This species occurs widely on the western Great Plains from central Alberta and eastern North Dakota to Kansas, the Texas Panhandle, and New Mexico. The range extends west to eastern Arizona.

Hardwick reports seeing a female oviposit on Artemisia frigida (Asteraceae) in Alberta, but the use of this foodplant has not been confirmed.

The adult flight period is mid-July to mid-September across the entire range of the species.