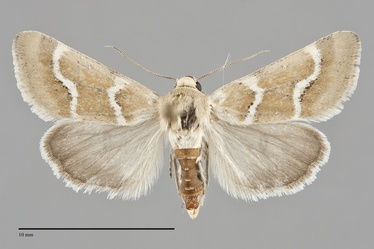 Schinia biundulata is a very small to small (FW length 8 - 11 mm), tan moth that flies in dunes in eastern Washington and Oregon during the spring. It has a simple pattern of smooth white lines on the forewing. The forewing is nearly even in color, slightly grayer along the costa and in the terminal area. The basal line is a pale dot at the base of the costa. The antemedial and postmedial lines are smooth, broad, and white. The antemedial line is bent, apex lateral, in the cell and nearly straight elsewhere. The postmedial line is gently S-shaped, convex lateral near the end of the cell, and concave toward the base on the lower half of the wing. Other lines and spots are absent. The hindwing is brown-gray, nearly even, with a white fringe with a gray base. The head and thorax match the forewing color. The male antenna is filiform.

This species can be identified by its small size, tan color, and simple pattern of two white lines. The most similar species is Schinia sexplagiata. In S. sexplagiata, the color of the forewing base and subterminal area are darker than the rest of the wing, unlike that of S. biundulata.

This species is narrowly restricted to dunes in steppe habitats at low elevations east of the Cascades and in the Great Basin region.  It is usually rare and sporadic but can be locally common.

Schinia biundulata has been found in south-central Washington and in the Snake River region of southern Idaho.

The range of this species extends south through Nevada, Utah, and California.

This species has been reared from eggs deposited in captivity on Gilia cana (Polemoniaceae) in California. The foodplant in the Northwest is unknown.

Adults fly during the spring and summer. They have been found from May to early July in and near our region.