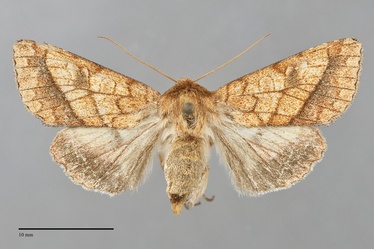 Pyrrhia cilisca is a bright orange-brown, medium-sized moth (FW length 16 - 17 mm) that flies in western Oregon in the summer. It has red-brown lines, spot outlines, and a gray shade in the subterminal area. The ground color is a rich orange-brown with a speckled look due to scattered red-brown scales. Most of the subterminal area except the lateral portion near the subterminal line and the costa is purplish gray, darkest near the postmedial line and fading slightly toward the wing margin. The lines and outlines of the spots are dark red-brown. The antemedial line is smoothly sinuous, bulging laterally between the veins. The median line is distinct and thin, oblique from its costal origin, smoothly curved over 90 degrees to touch or enter the medial reniform spot, and then straight and oblique toward the base to the trailing margin. The postmedial line is the darkest line. It is drawn sharply toward the base at the costa, with the remainder very smooth and gradually excurved opposite the cell and focally near the trailing margin. The subterminal line is dark, strongly scalloped toward the base between the veins. The terminal line is thin and weak. The fringe is orange with a purple tint. The orbicular spot is moderate-sized, round, with filling of the adjacent ground. The reniform spot is moderate-sized, weakly figure-eight shaped, with filling of the ground peripherally and slightly darker gray or red-brown centrally. There is no claviform post. The hindwing is light yellow-brown with a wide purplish gray to rose pink marginal band and a diffuse pale gray-brown discal spot. The terminal line is brown to pink. The hindwing fringe is pale orange. The head and thorax are orange-brown, slightly darker than the forewing. The male antenna is bead-like.

This species is colored like several fall-flying "winter moths" in the tribe Xylenini of the subfamily Noctuinae but flies in the summer rather in the fall like these moths. Pyrrhia cilisca is most likely to be confused with Pyrrhia exprimens, an uncommon but widespread moth in our area. It has a smoother and slightly redder forewing with dark brown shading lateral to the median line, often producing a forewing with light medial and dark outer halves, and has a darker blackish gray hindwing marginal band.

This species is common and widely distributed in hardwood forests of eastern North America.  In Oregon, it is a rare and very localized species that occurs in middle-elevation old-growth rainforests of the Coast Range.

Pyrrhia cilisca has been collected twice in the central portion of western Oregon near the Douglas-Lane County line. This represents a highly disjunct population.

The range of this species is eastern North America aside from the isolated Oregon records. The range extends from the island of Newfoundland to South Carolina along the Atlantic and westward to Manitoba, Colorado, and Texas.

This species is a generalist feeding on various hardwood trees, shrubs, and forbs.

The flight period of P. cilisca in the Northwest is early summer. It has been collected in June. It is a nocturnal moth that comes to lights.