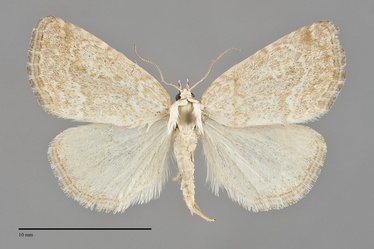 Protodeltote albidula is a common, small noctuid moth (FW length 10 - 12 mm) that is found in moist habitats throughout our region. It has a subtle pattern on a pale straw-colored forewing. The forewing is powdery with a silky sheen marked with slightly darker lines and spots that are difficult to make out in light specimens and become indistinct quickly with wear as the moths age. The antemedial, postmedial, and subterminal lines all appear similar with adjacent dark and light components with irregular course across the wing. The orbicular and reniform spots are pale and filled with the slightly darker ground color. The terminal line and fringe are darker, occasionally with gray scales. The hindwing is even lighter powdery pale cream with a silky sheen. Thin lines at the terminal line and basal fringe are the only markings. The ventral surfaces of both wings are coarsely peppered with dark gray. The head and thorax are similar light cream. The male antenna is filiform.

This species is usually easily identified by its small size, broad forewing shape, and light color with indistinct pattern. The dusky gray ventral wing color can help in recognition of worn specimens.

This species is widely distributed in wet grasslands of eastern North America.  In the Pacific Northwest, it is more restricted to wet grasslands in riparian zones along creeks, wet meadows, and around the edge of marshes at low elevations west of the Cascades and in the northern Rocky Mountain region.  The species is often abundant in these habitats.

Protodeltote albidula is common in forested regions throughout the Pacific Northwest. It does not occur in dry steppe regions in the interior of our region.

This species occurs across the Continent. In the East it is distributed from the island of Newfoundland to New York on the Coast and to Virginia in the Appalachian Mountains. The distribution in the West is not well known to us.

This species is a foodplant specialist feeding on grasses (Poaceae) in wet habitats.

Protodeltote albidula flies during late spring and summer, with records from mid-May to early August. It is nocturnal and comes to lights, but adults are easily flushed from grassy areas during the day. They are weak fliers and are netted with ease.