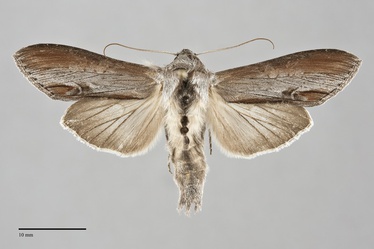 This species can be recognized from other Cucullia species by the smooth purplish gray and dark brown forewing lacking distinct marks other than the black dashes and postmedial line remnants on the lateral trailing margin. The most similar species is Cucullia postera which has a more streaky forewing with similar color and pattern.

This species is widely distributed across Canada in open areas of cool, moist forests.  In our area this includes open meadows and roadsides at high elevations in the Cascades and Rocky Mountains, and in coastal rainforests west of the Cascades.  It is usually rare and sporadic in the Pacific Northwest.

This species has a transcontinental range, occurring in a relatively narrow north-south distribution near the Canada-United States border to New England and Newfoundland. The range extends south to Kentucky in the Appalachian Mountains and Colorado, Utah, and northeastern Nevada in the Rocky Mountains. It also occurs in northern California.

This species is a foodplant specialist feeding on asters (Aster spp.) in the Asteraceae.

This species flies during the summer, usually in from May to early August. It is attracted to lights, but possibly less strongly than many other moths.