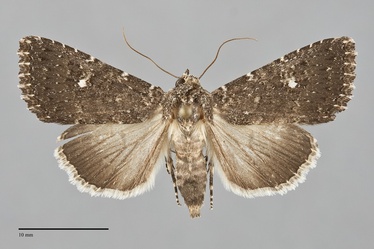 Condica albolabes is a medium-sized (FW length 16 - 18 mm), blackish-brown moth that flies on barren lava flows in the Cascade Range in the Northwest. It has a white spot in the lower half of the reniform and cream spots on the lines and checkering in the fringe. The forewing has a slightly pointed apex and scalloped outer margin. Its ground color is even without mottling or lighter or darker areas. The transverse lines are dark gray and double, but evident due to lighter filling that is prominent on the costa and weak elsewhere. A series of small pale dots on the veins forms an even arc at the outer margin of the postmedial line. The subterminal line is an undulating series of pale dots bordered medially by black wedges. The terminal line is black bordered medially by pale. The fringe is checkered brown and cream. The orbicular spot is thin and black filled with the ground color, very faint and often absent. The reniform spot is outlined in faint thin black and cream, filled with the ground color anteriorly and a pure white spot in the lower half. The wing lacks a claviform spot. The hindwing is pale gray with a dark gray outer half, dark veins, and discal spot. The position of the postmedial line is evident as dark on the veins in some specimens but is otherwise absent. The hindwing fringe is mottled gray at the base and white distally. The top of the head and thorax are dark brown with a slightly lighter tuft anteriorly. The male antenna is filiform.

This species can be identified in its restricted habitat by the even dark brown color in combination with a white spot in the lower reniform. Species of Aseptis, including Aseptis fumosa and Aseptis ethnica, have similar forewing color but lack the white spot. Their hindwings are darker gray basally than those of C. albolabes and have a concave notch in the anterolateral hindwing margin that is lacking in the genus Condica.

Condica albolabes flies on dry, barren lava flows at middle to high elevations in the Cascade Range of the Northwest. It is more generally distributed in dry forests elsewhere in its range.

This species has a restricted range in western Oregon in the Northwest. It has been collected in the central Cascade Range and in the Siskiyou Mountains.

The center of distribution of C. albolabes is the Southwest. It is most commonly collected in southern Arizona and western and central Texas. It also occurs further north in New Mexico and Colorado, extending west to California.

The early stages of this species are unknown.

This species is single-brooded and flies during the summer. It is nocturnal and comes to lights.