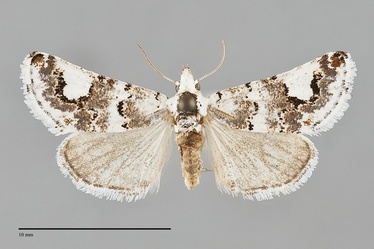 Tristyla alboplagiata is a very small (FW length 10 mm), white and powdery brown-gray moth that flies in the deserts of southeastern Oregon during the summer. It has an unusual large reniform spot that is open toward the costa and filled with pure white. The forewing is long and slightly pointed. The ground color is pure white, coarsely dusted with brown gray medial to the antemedial line, in the distal median area, and in the subterminal area. The lines and reniform spot are thick, black, and interrupted. Only segments of the basal, antemedial, and postmedial lines are present. The subterminal line is an irregular transition from gray subterminal area to the white terminal area. The terminal line is a series of black lines between the veins. The fringe is white with a black line opposite the cell. The reniform spot is large, heavily outlined in black posteriorly but widely open toward the costa to produce a dominant white mark on the anterior edge of the distal forewing. No traces of the orbicular or claviform spot are present. The hindwing is light gray-brown with slightly darker veins, a thin dark terminal line, and a pale two-toned fringe. The head and body are pure white with a few black scales on the posterior tegulae. The frons bears a three-pronged spike-like central tubercle. The male antenna is filiform.

This species can be identified by its large white reniform spot. No other species has a similar frontal tubercle.

This species has been found on very dry sagebrush steppe at low elevations in southeastern Oregon, but little information is presently available regarding habitat preferences of this species.

Tristyla alboplagiata has only been found in southern Harney County, Oregon, near the Nevada border.

This species occurs in Nevada and California south of our region. Its range extends south to the border with Mexico.

This species flies during the summer and has been collected in June in the Northwest. Records from California indicate a longer flight season there, with spring and late summer dates of capture. This species is nocturnal and comes to light.