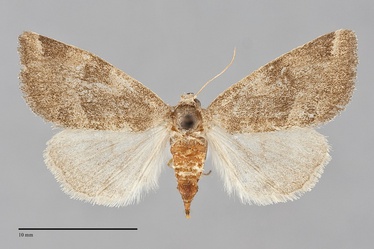 Plagiomimicus expallidus is a vaguely banded brown medium-sized moth (FW length 15 mm) which lacks distinguishing markings but can be identified by its pointed wing shape. The apex of the forewing is slightly pointed and the anal angle is broadly rounded. The color is grayish tan, often with a slight yellow or olive tint. The pattern is obscure, but the wing appears to be banded due to lighter areas at the base, in the anterior median area between the antemedial and median lines, and in the subterminal area, and near the apex (possibly a segment of the subterminal line). The antemedial and postmedial lines are slightly darker than the ground color, single, smooth, and gently undulating. The orbicular spot is absent or represented by a dark dot. The reniform spot is a dark lunule or absent. There is no claviform spot. The distal wing and fringe are unmarked. The hindwing is pale whitish tan with very faint discal spot, veins, and terminal line. The hindwing fringe is similar to the rest of the wing in color. The head and thorax match the forewing color. A crater-like frontal tubercle is present. The male antenna is filiform.

Although non-descript in general color and markings this species can usually be identified by its pointed wing shape and faintly banded pattern devoid of prominent lines and spots. If identification by pattern is in doubt the presence of the crater-shaped tubercle near the base of the antennae can be confirmed under magnification.

This species is widely distributed on dry short-grass prairies and disturbed open grasslands of the Great Plains, extending westward at low elevations into the Great Basin region.

Plagiomimicus expallidus occurs near the Snake River in southern Idaho to near the Oregon border. It reaches its western range limit in our area.

This is a species of the Great Plains. It occurs from southern Alberta, North Dakota, and Illinois to Utah, northern New Mexico, and the Texas Panhandle.

This species is reported to feed on Iva xanthifolia in the Asteraceae.

This species flies during the summer and has been found in July and early August in the Northwest. It is nocturnal and comes to lights.