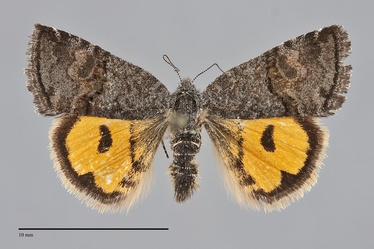 Annaphila depicta is a small (FW length 11 mm) day-flying moth that has been found in southcentral Washington and flies in the spring. It has a dark, blue-gray and brown forewing and an orange and black hindwing with a straight antemedial line and large discal spot. The forewing is short and triangular. The color is even dark blue-gray, slightly lighter in the median area distal to the reniform spot and in the terminal area, and brown between the median line and the reniform spot. The scales that produce the blue-gray color are dark gray with a glaucous edge. The basal, antemedial, and postmedial lines are similar, gray, double filled with lighter gray than the ground. The antemedial line is evenly zig-zagged on the veins. The postmedial line forms two laterally-directed bulges lateral to the reniform spot and is slightly obliqued toward the anal angle below the spot. The median line is black, smoothly concave toward the outer margin. The subterminal line is pale and sinuous. It is followed by a small black spot above the anal angle. The terminal line is dark gray, strongest on the posterior wing. The fringe is similar to the ground color. The reniform spot is weakly kidney-shaped with a thin gray outer and pale gray inner outline and filling of darker blue-gray. The other spots are absent. The hindwing ground color is clear light orange, suffused with gray near the base and black along the inner margin. A straight antemedial line is present. The black discal spot is large and half-moon shaped. The sharply defined black marginal band is thin, with a triangular tooth-like process toward the base on vein CuA2. The hindwing fringe is gray basally and light orange distally. The head and thorax are dark gray. The eye is reduced in size. The male antenna is filiform with black and white ringed segments.

This species has been found in dry canyonlands with an herbaceous plant community at middle elevations on the east slope of the Cascades in Washington.

Annaphila depicta has only been found in Klickitat County in south-central Washington. This area resembles many areas in northern California where A. depicta occurs. It is possible that the reported occurrence of this species in the Northwest represents a misidentification of A. macfarlandi. However, the range of A. depicta extends to near the California-Oregon border and this species should be sought in southwestern Oregon.

The range of A. depicta includes most of California west of the Sierra Nevada crest.

No information is presently available regarding larval foodplants of this species, but related species feed on Phacelia spp. in the Hydrophyllaceae.

Adults are diurnal and visit flowers during the day. It has been found in April in the Northwest.