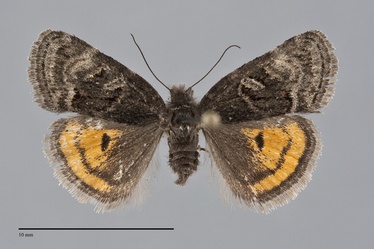 Annaphila danistica is a very small (FW length 8 - 12 mm), day-flying noctuid moth that flies in very early spring east of the Cascades. It has drab dorsal forewings with black spots on the underside and a gray-banded orange hindwing. The species is sexually dimorphic. The males are smaller males, have rounded forewings, and are more distinctly marked on both wings, while females are larger, have pointed forewings, and have reduce markings. The forewings wings of both sexes are dark gray, slightly lighter anteriorly and distally. Scattered tan scales in the median area are visible under magnification. The cell between the spots and medial median area are dark gray to black in a few specimens. The antemedial and postmedial lines are gray, double, and filled with slightly lighter gray than the ground. The antemedial line is straight or concave toward the outer margin, while the postmedial line is smoothly curved around the reniform spot. The position of the subterminal line is evident due to slightly darker gray shading medial to it in some specimens. A thin gray terminal line is present at the base of the gray fringe. The orbicular and reniform spots are similar, outlined with dark and light gray and filled with the ground color. The orbicular spot is kidney-shaped while the reniform spot is D-shaped, convex lateral. Both spots are jet black on the ventral wing. The claviform spot is a small black spot. Most females have a uniformly gray forewing with the pale outline of the spots faintly visible. The hindwing ground color is bright orange, heavily suffused with brown-gray at the base and inner margin, with a thick black discal spot. Dark gray to black sinuous postmedial line and very thin marginal band are present. The fringe is gray, darkest at the base. The dark markings are reduced in females, including the size of the discal spot and the thickness of the dark bands. The head and thorax are dark gray, with dense hair-like scales. The eyes are reduced in size. The male antenna is black and filiform.

This species is widely distributed in juniper woodlands and on sagebrush steppe at middle to low elevations east of the Cascades, and on dry grasslands at low elevations in southwestern Oregon.  It is locally common.

This species is found in California and in the Intermountain Region. Specimens have been examined from California, Nevada, and Utah.

No information is presently available regarding larval foodplants of this species, but related species feed on Phacelia spp. in the Hydrophyllaceae.

Adults are diurnal and visit flowers during the day. They fly in very early spring, often together with A. arvalis. Collection records from our region are from March to late May, with most from March and early April.