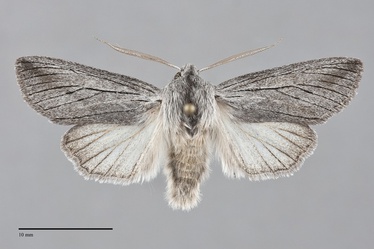 Pleromella opter is a spring-flying, smooth gray, medium-sized noctuid moth (FW length 16 - 17 mm) that flies in dry forests with manzanita or bearberry in western Oregon and Washington during the spring. Its markings are limited to dark veins. The forewing apex is slightly pointed. The color is nearly uniform steel-gray, slightly darker gray in an oblique area near the apex. The veins are thin and dark, with a similar thin black basal dash. The transverse lines and spots are absent except for a series of dark marks on the veins on the posterior two-thirds of the postmedial line. The fringe is the same color as the rest of the wing. The hindwing is light whitish gray in males, light gray in females, with a slight during of gray near the margin and dark veins. The hindwing fringe is slightly lighter than the adjacent margin. The head and thorax are gray with a slight median line on the collar and anterior thorax. The male antenna is widely bipectinate and the female antenna is biserrate.

This species is not likely to be confused with other spring-flying moths. It resembles Pleromelloida cinerea, but P. cinerea flies in the fall, and the two species do not occur together at the same time of year.

The Northwest range of this species appears to be limited to the Siskiyou Mountains of southwestern Oregon and the Cascade Range north to southern British Columbia.

Pleromella opter is also found in California to near the border with Mexico.

Adults are on the wing in the spring, with most records in our region from May. It is nocturnal and comes to lights.