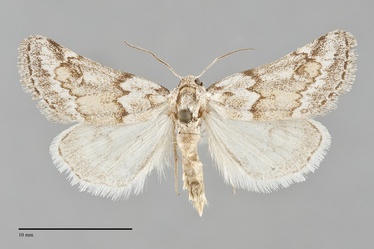 Acopa perpallida is a small moth (FW length 14–15 mm) that flies in eastern British Columbia and the deserts of southern Oregon and Idaho during late summer. It has long, powdery whitish-gray to light tan forewings with a strongly zigzagged antemedial line and no orbicular and claviform spots. The forewing has a long apex which is accentuated by a slightly concave costa. The nearly white wing is evenly dusted with black scales, slightly lighter on the base and in the subterminal area. The median area is light tan or rusty brown in some Great Plains specimens. An oblique dark patch in the anterior subterminal area extends from the distal reniform spot toward the apex. The basal, antemedial, and postmedial lines are similar, gray, simple. The antemedial line is strongly zig-zagged. The postmedial line is positioned far lateral on the wing, is lightly scalloped with teeth toward the base, has a broadly convex segment around the reniform spot and a straight posterior segment angled 45° toward the base. The postmedial line is pale, diffuse, evident as demarcation of the subterminal gray patch from the paler terminal area. The terminal line is thin and dark. The fringe is even light gray. The reniform spot is positioned far lateral and is kidney-shaped, outlined in gray, filled with white or rust-brown peripherally and gray centrally. The hindwing and fringe are white, with pale gray discal spot, faint postmedial line, and light suffusion toward the outer margin, and a darker terminal line. The frons has a blunt conical tubercle. The head and thorax are light gray. The male antenna is simple.

This species can be identified by its long forewing shape, powdery white color, strongly zigzagged antemedial line, wide median area, and absence of orbicular and reniform spots. It is more likely to be mistaken for a pyralid moth (Pyralidae) than another member of the superfamily Noctuoidea.

The small genus Acopa is in need of revision. Acopa perpallida Grote, type locality southern Kansas, and Acopa carina Harvey, type locality Texas, are likely to be synonyms (D. Lafontaine, personal communication 2012). The type specimen of A. carina is very dark but otherwise similar to the specimen from Colorado which we figure on this site. We maintain current use of the name A. perpallida for the Pacific Northwest populations but recognize that A. carina is the older of these names.

This species occurs on very dry, desert sagebrush steppe at low elevations in the Great Basin region and on the Great Plains.

Acopa perpallida has been collected in southeastern Idaho and in the Alvord desert of southeastern Oregon in the southern portion of the Northwest region. It also occurs in eastern British Columbia at the northern end of its distribution.

Acopa perpallida is a species of the western Great Plains and Intermountain region. It has been collected from southern Alberta to Texas at the eastern end of its range. The distribution extends west to southern California across New Mexico and Arizona, and north to the southern border of the Northwest region.

The adults of A. perpallida fly during the summer and have been collected in late August and early September in Idaho and Oregon. They are nocturnal and come to lights.