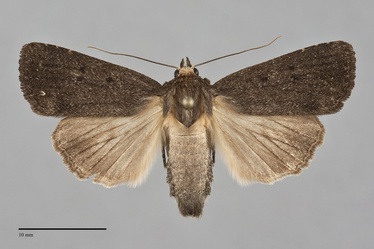 Amphipyra tragopoginis, called The Mouse in Great Britain, is an even, dark brown, medium-size moth (FW length 16 - 18 mm) that occurs in a variety of habitats during the summer and early fall. It has three black spots marking the positions of the orbicular and reniform spots, one at the former and two at the latter spot. The forewing is relatively broad with a squared-off outer margin. The color is slightly shiny brown, nearly even except for a slight darker shade medial to the sinuous subterminal line. The other lines are absent. A single black dot forms the orbicular spot and the reniform spot is formed by two spots, one at the anterior and one at the posterior ends. There is no claviform spot. The hindwing is shiny yellow-gray, darker toward the outer margin with a dark gray fringe and veins. The head and thorax are smooth dark brown. The male antenna is filiform.

This species is similar to a few other dark brown moths in size and wing-shape. None of these has the simple pattern of black dots at the ordinary spots.

This species is widely distributed across Canada and the Pacific Northwest in moist, open habitats, including meadows in riparian zones along creeks and rivers, agricultural areas, and disturbed urban areas.  It is particularly common at low elevations west of the Cascades, but tends to be rare and sporadic east of the Cascades outside of agricultural or urban areas.

Amphipyra tragopoginis is found in a variety of habitats across our region as far north as the southern third of British Columbia. It is most common in forests and occurs on both sides of the Cascades. It is less common in dry steppe but has been found in developed and riparian areas in the Columbia Basin.

This species has a Holarctic distribution and might have been introduced into North America from Europe (Forbes 1954). In North America is occurs in the East from southern Canada to Pennsylvania and West Virginia west to the Mississippi. In the West it has been found in the southern halves of Alberta and British Columbia south to northern California.

The adults of A. tragopoginis fly in late summer and early fall. They have been collected from late June through to October in our area, but are most common in late July and early August. This species is nocturnal and comes to lights.

This species is sometimes a minor pest in nursery crops.