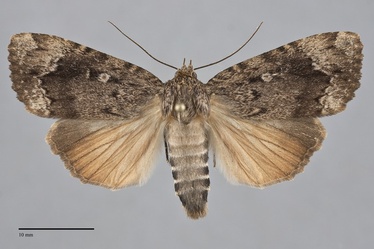 Amphipyra pyramidoides is a large (FW length 20 - 25 mm), broad-winged moth that flies in forests throughout our region during the summer and fall. It has coppery hindwings and dark, wood-brown forewings with a distinct sheen. The distal median area is darker due to a diffuse median line that runs through the reniform spot, and the subterminal area and apical and anal portions of the terminal area are lighter silvery brown. The lines are dark brown, double with slightly lighter gray-brown filling. The antemedial line is very irregular on the veins but is oriented nearly straight across the wing. The postmedial line is slightly irregular and broadly excurved; the course is unusual because it extends further toward the margin at mid-wing than near the end of the cell as in most other noctuid moths. The subterminal line is pale and sinuous, most evident near the anterior margin. It and the postmedial line are preceded by long wedge-shaped dark marks; the cell is also dark medial and lateral to the orbicular spot. A series of thin wedges forms the terminal line. The fringe is similar to the rest of the wing. The orbicular spot is dark in outline and filled with pale gray and a variable small central ocellus. It is usually oval. The reniform spot is incomplete and indistinct, often only visible as apparent interruption of adjacent dark marks. The claviform spot is a small dark mark or absent. Most of the hindwing is characteristically shiny copper-colored, with a duller brown anterior margin and fringe. The head and thorax are smooth brown. The abdomen is dark gray with the end of each segment lighter tan or slightly orange producing a segmented look. The male antenna is filiform.

This species is unmistakable due to its size and coppery hindwing.

Larva is smooth with a large dorsal hump at the tail.  The color is green with fine white spots and a pale yellow lateral line.  It is illustrated by Miller & Hammond (2003).

This species is found in moist hardwood forests throughout most of North America.  In the Pacific Northwest, it is particularly abundant in oak woodlands, mixed hardwood forests, and coastal rainforests at low elevations west of the Cascades.  It is also common in mixed hardwood-conifer forests at middle elevations in the Cascades and Rocky Mountains.

Amphipyra pyramidoides occurs in forests throughout most of our region as far north as south-central British Columbia. It is found on both sides of the Cascades, but does not occur in dry sage steppe or juniper forests east of the mountains.

This species is widespread in North America. It is most common in the East where it is found from southern Canada to northern Florida and central Texas. The species is common along the Pacific Coast to central California. There are scattered records from the southern Rocky Mountain region but the species appears to be absent from most of the arid Basin and Range Ecoregions.

This species is a generalist feeding on most kinds of hardwood shrubs and trees.  In the Pacific Northwest, it particularly uses such families as Betulaceae, Fagaceae, Aceraceae, Salicaceae, Rosaceae, and Ericaceae.

Amphipyra pyramidoides flies in a single generation from mid-summer through the fall. It first appears in early July but is most common at the end of August and in early September. It comes to lights but is also attracted to sugar baits.