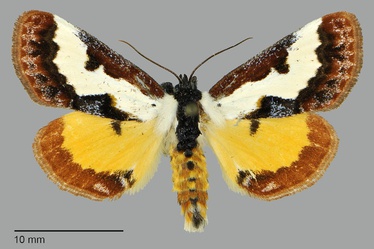 Eudryas brevipennis is a distinctive, small to medium-sized moth (FW length 14–16 mm) that flies in southern Idaho during the summer. It has white forewings and bright yellow hindwings that are both edged in red-brown. Most of the forewing is pure white, extending from the base to the scalloped postmedial line. The costa from the base to just beyond the reniform and trailing margin from near the base to the postmedial line are dark red-brown suffused with lavender scales. The dark area on the costa is nearly even in width and is contiguous with the reniform but separate from the postmedial line by white. The dark on the trailing margin bulges anteriorly in the median area and is fused to the dark area distal to the postmedial line.The terminal wing is purplish red, darkest adjacent to the postmedial line. The postmedial line is located near the outer margin, double, dark brown with lighter brown filling, and is smoothly crenulate. The subterminal line is lavender and is preceded by dark spots between the veins opposite the cell and near the anal angle. The terminal line is a series of dark red-brown spots between the veins. The margin is scalloped and the fringe is red-brown. The medial portion of the reniform is light brown filled with white. The lateral portion of the spot is open toward the outer margin. The hindwing is bright yellow with a scalloped and weakly striped red-brown marginal band. Black and white marks are present medial to the marginal band near the anal angle. The discal spot is dark gray. The head, central thorax, and tufts at the base of the abdomen are dark gray while the tegulae are white. The abdomen is yellow with black and white spots at dorsal midline of each segment and pale scales on the distal end. The male antenna is bead-like.

This species is unmistakable due to its distinctively patterned forewing and bright yellow hindwing.

The Idaho and Utah populations of this moth were recently recognized as subspecies E. b. bonneville Shepard & Crabo. It differs from the nominate subspecies from western California in having narrower dark margins and smaller discal spots on both wings, resembling superficially the eastern North American Eudryas unio Guenée. The structure of the male and female genitalia of subspecies bonneville confirm its relationship to other populations of E. brevipennis.

This species has only been found in southern Idaho near the Snake River in our region.

The North American range of E. brevipennis is limited to Utah and California outside of Idaho. The California populations, E. b. brevipennis,are found near San Francisco Bay, the adjacent Central Valley, and near Los Angeles.

This species is a foodplant specialist feeding on Onagraceae including evening primroses (Oenothera spp.) and fireweed (Epilobium spp.)

Adults are found during the summer in Idaho. They are nocturnal and have been collected at lights.