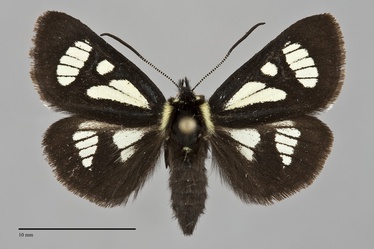 Androloma maccullochii is a distinctive, medium-sized (FW length 11 - 16 mm), day-flying black moth that flies in boreal and montane forests during spring and summer. It has light yellow patches on the forewing that are traversed by black veins. The central light area on the forewings of both sexes appear to have a large black V or Y-shaped mark in addition to the black veins, with the bar-like orbicular and reniform spots forming the upper part of the letter-shaped mark. Metallic scales produce shiny patches in the black portions of the forewings. The costa of the male is swollen at mid-wing forming a groove posteriorly. The hindwing is black with different-colored light areas in the two sexes: white in males and light yellow, like the forewing patches, in females. The hindwing pattern is similar in males and females with medial and lateral patches separated by a large black bar at the position of the discal spot. All of the veins traversing these pale spots are black. The fringes of both wings are entirely black. The head is black with yellow patches lateral to the eyes. The thorax is black with yellow patches on each side of midline on the collar and yellow tegulae. The tibias of the prothoracic and metathoracic legs are bright orange. The abdomen is black with light scales on the dorsal aspect of the anterior segments. The eyes are bare. Both sexes have antennae with black and white ringed segments and are simple with a long club-like thickening of the distal half.

This species is most similar to Alypia ridingsii, a species that is found in steppe habitats. Both sexes of this species have light yellow areas on both wings, so males are unlikely to be confused with A. maccullochii in which this area is white on the hindwing. Only the two most caudal veins in the outer pale area of A. ridingsii are black, while all of the veins in this field are black in A. maccullochii. In addition, A. ridingsii only has orange on the mid-tibia and lacks orange tibia on the foreleg unlike A. maccullochii.

This species is widely distributed in open habitats across Canada, extending throughout much of western North America.  In the Pacific Northwest, it is sporadic and rare on native prairies at low elevations west of the Cascades, but is common in open meadows, clear-cuts, disturbed roadsides, and in burned areas of coniferous forests in the Cascades and Rocky Mountains.  It is also common in dry canyonlands at low to middle elevations east of the Cascades.

Androloma maccullochii is widely distributed in British Columbia, although most of the records are from the southern province. It occurs in mountains further south, including in the Olympic Mountains, Cascades, and the western Cordillera.

This species occurs across northern North America from Alaska to eastern Ontario, flying to the northern limits of trees. Its range extends south through the mountains of western North America, reaching southern Colorado in the Rocky Mountains, northern Nevada in the Basin and Range, and the southern Sierra Nevada in California.

This species is a foodplant specialist feeding on various Onagraceae.  This includes Clarkia spp. on native prairies west of the Cascades, fireweeds (Epilobium spp.) in the mountains, and evening primroses (Oenothera spp.) in dry habitats east of the Cascades.

This species flies in the spring and summer, generally early at low elevations and later at altitude. Records extend from late April to early August in the Northwest but are most common in may. The adults are diurnal and visit flowers. This species takes nectar at bear berry (Arctostaphylos uva-ursi) in the Cascade Mountains.