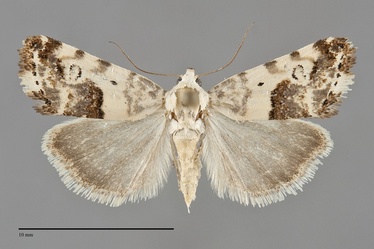 Ponometia sutrix is a small (FW length 10 - 12 mm) cream-colored noctuid that flies in arid habitats in Oregon and Idaho during the summer. This moth is marked with pale gray at the base of the forewing and dark gray on the distal forewing. The pale ground color is clearly yellowish, not pure white, and extends from the base of the wing to the median line on the lower half of the wing and to the subterminal line on the costa. The rest of the outer wing is mottled gray and brownish gray. The basal, antemedial, and anterior portions of the median and postmedial lines are pale gray. The posterior half of the median line, which forms the border of the distal dark area, is a black line. The segment of the postmedial line near the reniform spot is also black. The irregular subterminal line is white, with a few adjacent black scales. A series of black dots forms the terminal line. The fringe is gray, interrupted by a cream patch on the lower half anterior to the anal angle and also near the apex in some individuals.The orbicular spot is a black dot. The reniform spot is variable, nearly absent to black, and filled with the cream ground. The claviform spot is absent. The hindwing is light brownish gray, slightly darker toward the margin. The head and thorax match the ground color. The male antenna is filiform.

This species is most likely to be confused with Tarache toddi. This species is similar cream with dark on the distal forewing and occurs in similar habitats with a similar distribution in our area as P. sutrix. It has a gray rectangular spot on the costa that is fused with the dark-filled reniform spot, features that are lacking in P. sutrix.

This species is widely distributed in arid grasslands and rangelands throughout much of western North America.  In the Pacific Northwest, it is common on open sagebrush steppe at low elevations in the northern Great Basin region east of the Cascades.

No information is presently available regarding larval foodplants of this species, but it probably feeds on Asteraceae like related species.