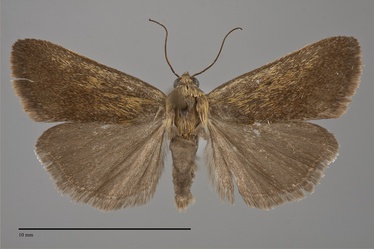 Ponometia fumata is a very small (FW length XX - XX mm), uniform. drab gray moth that flies in southern Oregon and Idaho in our region. This moth lacks forewing markings. The hindwing is dark gray, and the hindwing fringe is white with a gray base. The head and thorax are also gray. The male antenna is filiform.

This species can be identified by its small size and uniform medium-dark gray appearance. It can only be confused with dark specimens of Ponometia tortricina and Ponometia nigra. The former species is similar in size. It usually has lighter ochre to light olive scales on the anterior forewing that are lacking in P. fumata. Ponometia nigra is smaller and blacker, with a slight green sheen in fresh material.

The exact habitat of this species is unknown. It most likely occurs in dry grasslands and sagebrush steppe at low elevations.

Ponometia fumata is found in southern Oregon and southern Idaho in the Pacific Northwest. In Oregon it has been recorded from the Siskiyou Mountains in Jackson County as well as in the southeast near the border with Idaho. It is recorded from the Snake River Plain in Idaho.

The range of this species is western North America. It is recorded from California, northern Utah, and Wyoming outside of the Northwest (Nearctica.com).

The early stages of P. fumata are unknown. It most likely feeds on plants in the mallow family (Malvaceae) based on the preferences of related species.

This species flies during the summer. Moths have been collected during June and August in southern Oregon.