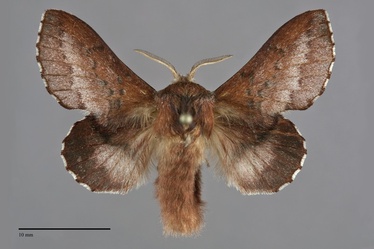 Phyllodesma americana is an abundant red-brown moth that flies throughout most of our region during spring and early summer. It is medium-sized, with larger females (FW length 14–17 in males; 19–22 in females). Its wings have blue-gray shading and their outer margins are weakly scalloped, accentuated by checkering. The forewing posterior margin has a large flange and the anal angle has a deep concave contour that is unique to the genus. The hindwing anterior margin is anteriorly convex at the base and deeply concave laterally (best shown on the ventral images). Both fore- and hindwings are bright brick-red with light blue-gray in the cell, the distal subterminal area, and terminal area. The antemedial, postmedial, and subterminal lines are dark gray or red-brown, thick, slightly uneven, and interrupted by the veins. The former two lines are bent toward the base near the costa. The orbicular and discal spots are dark spots, similar to the lines in color. The fringe is checkered red-brown and white. The hindwing is darker than the forewing, usually with blue-gray shading between darker gray postmedial line and a wide marginal band. The hindwing fringe matches that of the forewing. The head and thorax are red-brown. The antennae are bipectinate, strongly in males and weakly in females.

This moth is easily identified in most of our area by its red color, scalloped margin, and deeply concave notch at the anal angle of the forewing. It is only likely to be confused with Phyllodesma coturnix which occurs in southwestern Oregon. The distinguishing features of these species are the sizes of the moths and male genitalia, both larger in P. americana according to Franclemont (1973). In our region the few specimens sorted as P. coturnix are lighter orange-brown than P. americana and have a less mottled pattern. The relationship of these taxa is in need of further investigation (see further discussion under P. coturnix).

The larva has lateral tufts of soft, fuzzy gray hairs, dorsal color is mottled gray and yellow-orange. It is illustrated by Miller and Hammond (2003).

This species is common to abundant in all forests and riparian habitats throughout the Pacific Northwest, occurring at most elevations to near timberline.  It is most abundant in moist to moderately dry forests, and is relatively uncommon in very dry juniper woodlands east of the Cascades.

Phyllodesma americana is found in forests throughout our region, as far north as northern British Columbia not far south of Yukon Territory.  It is least common in arid steppe habitats where it is restricted to riparian areas and scattered aspen groves.

This species is found throughout most of North America except the Southeast where it is replaced by Phyllodesma carpinifolia (Boisduval).

This species is a generalist hardwood feeder, and has been recorded on at least 12 genera of trees and shrubs in the families Rosaceae, Salicaceae, Rhamnaceae, Betulaceae, and Fagaceae.

Adults have reduced mouthparts and do not feed. The are strong fliers with a rapid buzzing flight.  This species is nocturnal and is readily attracted to lights, although females are less often collected than males.  Pacific Northwest records extend from early spring to late August, with most records from late April to early July.