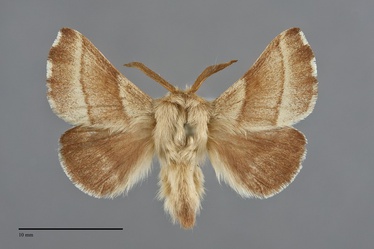 Malacosoma californicum is a common red-brown, tan, and yellow-brown moth that flies in forests throughout our region. Males are smaller than females (FW length 10–12 mm in males; 15–19 in females). Both sexes have rounded forewings, but those of males are stubbier. Markings on the forewing are limited to slightly curved antemedial and postmedial lines. The ground color is most commonly medium-dark red-brown in males, and light reddish tan in females. The forewings are traversed by smoothly laterally convex antemedial and postmedial lines, both lines slightly darker than the ground color with light yellow-brown outer components, and lack other markings other than a few white segments in the fringes. Individuals are quite variable in the amount of lighter yellow brown shading on the forewings. Males range from dark with no lighter areas, light everywhere except in the median area, to almost entirely light. The transverse lines appear entirely light in dark individuals and predominantly dark in light ones. Females are less variable than males. They are typically dusted with lighter scales, least so near the transverse lines. The hindwings of both sexes are nearly entirely red-brown, lighter in females, with markings restricted to a faint median band and lighter fringe.

This species is easily identified as being a tent caterpillar by the yellowish or red-brown color and very simple pattern of smooth lines bordering the median area. Dark males of M. californicum are unlikely to be confused with other moths. Light males and females are similar to Malacosoma disstria, which are warmer orange-brown and lack a light component of the forewing transverse lines in both sexes, unlike those of M. californicum. Malacosoma constrictum, found only near forests with oak, has uniformly light yellow-tan males and red-brown females.

Populations of M. californicum is divided into several subspecies by Franclemont (1973). Our populations are referable to Malacosoma californicum pluvialis (Dyar). The type locality of Clisiocampa pluvialis Dyar is Pacific Northwest [Seattle, Washington].

The larva has long white lateral hair tufts. Its color is a complex mixture of blue, black, and orange with white dorsal patches.  It is illustrated by Miller and Hammond (2003).

This species is common to abundant in nearly all habitats throughout the Pacific Northwest, including coastal rainforests, mixed hardwood forests, oak woodlands, high mountain forests, riparian habitats, juniper woodlands, and desert rangelands.  It frequently has mass epidemic outbreaks, particularly in drier habitats east of the Cascades.

Malacosoma californicum occurs widely in forests throughout our area at least as far north as far northeastern British Columbia and is equally common on both sides of the Cascade Mountains.  It is least common in steppe habitat such as in the Columbia Basin and deserts of southern Oregon and Idaho, although it is found in riparian areas and mountains in this region.

Malacosoma californicum is widely distributed in the American West, at least as far south as southern California, northern Arizona, and southern New Mexicoa and as far east as the Great Plains. This species has been accidentally introduced into eastern North America on nursery stock.

This species is a generalist hardwood feeder, and has been recorded from at least 15 genera of trees and shrubs in the families Aceraceae, Rosaceae, Salicaceae, Rhamnaceae, Ericaceae, Betulaceae, and Fagaceae.  The most favored foodplant in juniper woodlands and sagebrush rangelands is bitterbrush (Purshia tridentata) in the Rosaceae.  Larvae live communally in silken tents.

Adults of M. californicum are single brooded and are on the wing during the summer.  They are most commonly collected in late June and July. They are nocturnal and come readily to light, although males much more commonly so than females.  They have a rapid buzzing flight and commonly bounce along the ground near lights.  The mouthparts are vestigial and the adults no not feed.

This species is a known pest on hardwood trees, and may cause considerable damage in fruit orchards. Like other species of Malacosoma it experiences sporadic outbreaks.