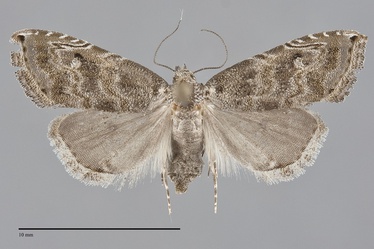 Phobolasia anfracta is a tiny erebid moth (FW length 8 - 10 mm) with elongate, apically pointed forewings. It is our only representative of the subfamily Scolecocampinae. The forewing ground color is dull gray-brown. The antemedial and postmedial lines are pale and double. The former is wavy and is directed nearly straight across the forewing, while the postmedial line is undulating and is directed toward the wing margin opposite the reniform spot. A series of fine stripes mark the distal costa. The thin reniform spot is dark, and there are dark dots at the wing base and margin just below the apex. The hindwing is pale gray with a small dark spot at the anal angle and a very faint discal spot.

This species can be identified by its small size, distinctive wing shape, and the regular pale stripes on the costa of the forewing.

This species is widely distributed in western North America.  In the Pacific Northwest, it is usually rare and found in general forest or steppe habitats at low to middle elevations.

Phobolosia anfracta has a spotty distribution in the Pacific Northwest. It has been collected in southern British Columbia, the Columbia Basin, the eastern Blue Mountain region of central Oregon, southern Idaho, and southwestern Oregon.

Phobolosia anfracta has been collected from early June to mid September. It likely has several broods in our area. It is nocturnal and comes to lights. This moth is easily overlooked in light traps due to its small size. It can be common where it occurs.