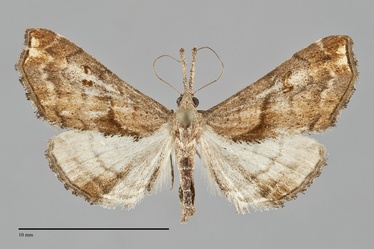 Palthis angulalis is a unique-looking moth with long, rounded-tipped palpi and long, angular wings with a distinctive pattern. It is small (FW length 10 - 14 mm). The forewings appear mottled, warm brown, bluish to purplish gray, and burnt orange. A dark brown shade forms a distinctive curved triangular mark along the posterior median area, and the reniform spot is prominent due to filling with the same color. The apical wing is mottled with yellow. The hindwing is whitish with patchy gray and warm brown at the outer margin, and is banded with gray median, postmedial, and subterminal lines.

This distinctive moth can be recognized by its long up-turned palpi and unique wing pattern.

This species is widely distributed in moist forest habitats across North America.  In the Pacific Northwest, it is particularly abundant in coastal rainforests, mixed hardwood forests, and mixed hardwood-conifer forests at low elevations west of the Cascades, but extends to moist forests in the Rocky Mountain region.

Palthis angulalis is found in forests throughout the Pacific Northwest.

This species also occurs in the eastern part of North America. In the east it is found from southern Canada to Washington, D.C. and Texas.

This species is a generalist feeding on many woody shrubs and trees in the families Rosaceae, Betulaceae, and Pinaceae, and will apparently feed on both live and dead leaves.

Adults fly in early and mid summer, with Pacific Northwest collection dates from early June to early August. It is nocturnal and comes to light.