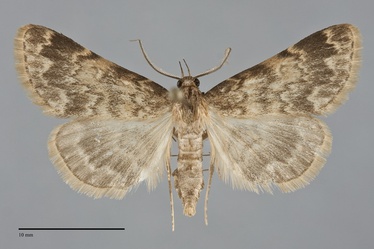 Idia occidentalis is a medium to large Idia (FW length 12 - 21 mm) from dry steppe habitats which has pale tan wings, darker at the costa, traversed by dark gray-brown lines and shading. Most specimens have irregular antemedial, median, and postmedial lines and a light subterminal line preceded by a similar-colored wide dark postmedial area. The reniform spot is faint, medium size, filled with the light tan. The hindwing markings are similar dark banding on light tan ground. The antenna is biciliate in males and simple in females.

This species is most similar to Idia lubricalis which tends to be smaller and has dark forewings traversed by light lines. Idia immaculalis is similar in size to I. occidentalis and occurs in similar desert habitats, but lacks all lines and spots.

This species is usually uncommon, but is widely distributed at low elevations east of the Cascades in dry open grasslands and juniper woodlands.

Idia occidentalis is found in the dry interior steppes of British Columbia, Washington, Oregon, and Idaho.

This species  occurs in the American West, at least as far south as southern California.

No information is presently available for this species, but it is probably a detritivore feeding on dead leaves like related species.

Adults of this species have been collected throughout the summer and fall months from early June until late September. It is nocturnal and comes to lights.