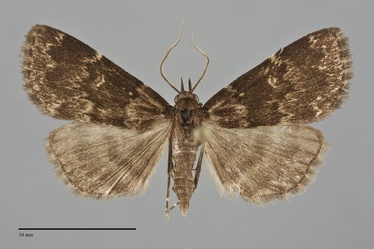 This species is widely distibuted across much of North America in relatively warm grassland and woodland habitats.  In the Pacific Northwest, it appears to be most common at low elevations in dry open grasslands and open oak woodlands in southwest Oregon.

Idia lubricalis has a spotty distribution in our region. It has been collected in southern British Columbia, southern Washington, and southwest Oregon in the Pacific Northwest.

This species has a wide distribution in North America. It is widespread in the East.

This species is a detritivore feeding on dead leaves and fungi associated with dead wood.

Adults have been collected in July and August in our region. They are nocturnal and come to light and sugar baits.