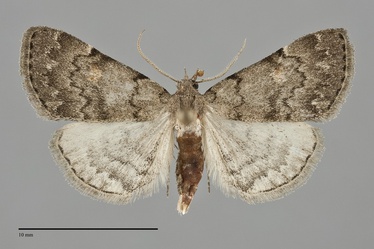 Idia "concisa" is a small, gray Idia (FW length 9 - 13 mm) found in the northern portion of the Pacific Northwest. It has whitish gray hindwings. The forewing is medium gray, darker near the costa and distal margin. It is marked with irregular dark basal, antemedial, and postmedial lines, a diffused median line, and a light subterminal line preceded by a dark gray shade. The reniform spot lacks a dark outline but is evident as the warm light ochre to reddish brown filling. The hindwing is lighter whitish gray marked with several irregular darker gray lines and a thin dark discal spot.

This species is most similar to Idia aemula, a rare species in our region. Unlike I. "concisa," the hindwings of I. aemula are similar in darkness to the forewings.

The species name is given in quotations because the name concisa was used for this species by Forbes (1954) and subsequent authors but is a synonym of Idia aemula (Lafontaine & Schmidt 2010). It is likely that this species is undescribed.

Idia "concisa" occurs in the northern portion of our region. It has been collected in southern British Columbia and northeastern Washington.

This species occurs across boreal North America to the Atlantic Coast where it is found as far south as central New York.

No specific information is presently available for this species, but it is probably a detritivore like related species.

Adults have been collected from mid June through the fall, but most records are from the summer months. The adults are nocturnal and come to lights.