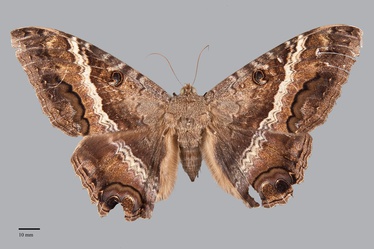 Ascalapha odorata, the Black Witch, is an unmistakable, large brown moth (FW length 79 - 82 mm) that is a rare migrant to our area from the south. The forewings are shaped like an obtuse triangle with a fairly long apex. Both wings are deep wood brown, with a variable complex pattern of lines and spots. The straight postmedial lines can be pale whitish (shown) or inconspicuous. The forewing reniform spot is comma shaped, with dark filling except lighter bluish in the "tail," producing a convincing eyespot. The markings near the anal angle of the hindwing are also distinctive and give the impression of eyes. The body is brown similar to the wings.

This large brown moth with eyespot-like reniform spots cannot be confused with any other species in our area.

This species is common and widely distributed throughout the tropical regions of Central America, and often migrates northward through western North America.  In the Pacific Northwest, it only occurs as a rare stray and is not a permanent breeding resident.

This species has no established breeding populations in our area. Migrants are sporadically found throughout our area. Interestingly, they have been most commonly found in two areas: western Oregon and eastern Washington.

This species is widely distributed in tropical Central and South America. It is reported as breeding near San Diego in southern California and possibly in southern Arizona.

This species is a foodplant specialist feeding on woody Fabaceae such as Acacia species.

Adults are highly vagile and migrate for hundreds of miles. They are primarily nocturnal and come to light and sugar baits.