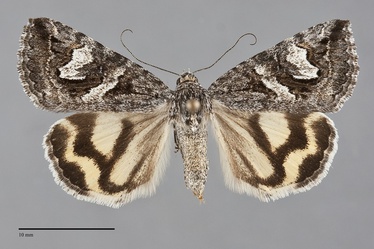 Drasteria nubicola is a gray and yellow Drasteria from dry steppe in southern Oregon and Idaho. It is a fairly small Drasteria (FW length 15 -17 mm) with streaky medium gray forewings. An oblique band between the antemedial line and median line and the spot between the reniform spot and postmedial line are whitish gray. The darkest areas are below the cell basal to the antemedial line, below the reniform spot, and at the apex. The anterior subterminal line is preceded by several black wedges. The hindwing is pale yellow with typical black marks for the genus: fused discal spot and postmedial line and marginal band. The thorax is gray. The antennae are ciliate in males and simple in females.

This species is close in appearance to Drasteria hudsonica, a northern species that flies in forests. These species are not likely to be confused because of the lack of overlap in habitat or range. Drasteria nubicola is lighter gray, has a streakier appearance, and the pale band following the antemedial line and postmedial line near the reniform spot are more oblique relative to the wing than in D. hudsonica. In addition, D. nubicola lacks the red-brown median band found in most individuals of D. hudsonica.

Drasteria nubicola has been collected in very dry, open areas with sand dunes and salt flats in southern Oregon.

Drasteria nubicola reaches its northern limit in the Pacific Northwest. It has only been collected in the Crescent Dunes near Denio in Harney County, Oregon and on the Snake River Plain in southern Idaho.

This species occurs in the deserts of southwestern North America.

The foodplant of this species is unknown.

The only Pacific Northwest records of this species are from July and early August. It is nocturnal and comes to light.