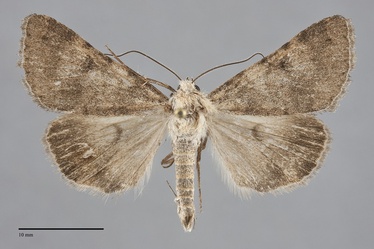 Drasteria inepta is our dullest Drasteria species. It is fairly large (FW length 20 - 22 mm) with a variable, slightly mottled gray-brown forewing with inconspicuous transverse lines and reniform spot. The lines are darker in some individuals. The irregular antemedial line is double, as is the postmedial line which lacks the conspicous dentate lateral projection near the reniform that is strongly developed in most Drasteria species. The postmedial line is faint, occasionally prominent due to a row of preceding dark spots. The reniform spot is light gray with several light spots along its outer margin. The hind wing is light gray-brown with a broad marginal band, the latter interrupted by a single light spot near the anal angle. The head and thorax match the forewing color. The antennae are ciliate in males and simple in females.

This species is similar to Drasteria sabulosa and Drasteria scrupulosa in having dull-colored hindwings, not bright orange, red, or white as in the other members of the genus. It can be distinguished from both of these species by its dull mottled forewing which lacks an angular postmedial line near the reniform spot. It can be told from D. scrupulosa from its range, since D. inepta occurs in southern Idaho and D. scrupulosa has only been found in south-central Oregon in our area.

This species is common and widely distributed in dry, open oak woodlands or juniper-pinyon woodlands throughout the southern Rocky Mountains and Southwest, and barely enters the Pacific Northwest.

Drasteria inepta has only been found in the southeastern corner of Idaho in our region.

This species is predominantly found in the Intermountain West. It occurs from Wyoming and Utah to west Texas and Arizona.

The adults are on the wing during the summer months. It is bivoltine in most parts of its range with early summer and late summer broods. This species is nocturnal and comes to light.