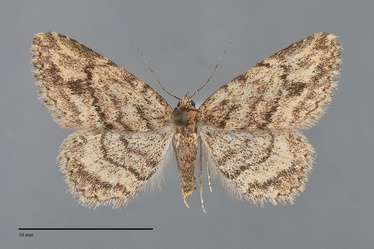 Mycterophora monticola, like other members of the genus, is a small moth (FW length 12 mm (N=1)) with broad, slightly scalloped wings, a light body, and broad male antennae. Both wings are similar, very pale red-brown sprinkled with dark scales with a pattern of scalloped dark transverse lines. All of the ordinary forewing lines are present. They are directed toward the wing margin at the costa, but are sharply angled toward the wing base near the top of the cell. Most specimens have a dark smudge between the postmedial and subterminal lines, and the distal costa is darker than the rest of the wing.The spots are small and inconspicous. The palpi are long. The male antenna is strongly bipectinate and that of the female is simple.

The larva of this species is unknown.

No information is presently available regarding the habitat of this species.

Mycterophora monticola is only known from a small portion of northern Oregon in our area. They occur along the east slope of the Cascade Mountains near the Columbia Basin.

This species occurs in western North America. The limits of the range outside our area is poorly known.

The life history of this species is unknown.

Adults are single brooded and fly in July. They are nocturnal and come to light.