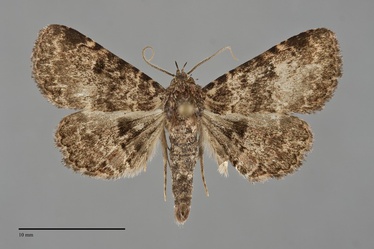 Metalectra bigallis is fairly small (FW length 14 mm), mottled, dark brown moth with stubby rounded wings with lightly scalloped margins at the base of the fringe. Both forewings and hindwings have mottled, dark brown ground color with irregular poorly defined pale lines. The costa and filling of the reniform spot are darker sooty black on the forewing, and the large discal spot and surrounding wing base is similar blackish on the hindwing.

Although this moth is fairly nondescript, it can usually be recognized by the rounded wing shape, mottled brown color, and large sooty discal spots.

This is a southwestern species that occurs in dry open habitats at low elevations in southwest Oregon.  It has only been found in low elevation forest near the Yakima River in Washington.

This species has a disjunct distribution in the Pacific Northwest. Most specimens are from forests in southwestern Oregon. It has also occurs in agricultural areas along the Yakima River where it was discovered by Pete Landolt.

This is a western North American species that has been recorded from California and Arizona outside of our region.

No information is presently available regarding larval foodplants of this species. Other members of the genus Metalectra feed predominantly on fungi.

This species has been collected from early June to mid October in the Pacific Northwest suggesting that it might have several broods. The adults are nocturnal and come to lights. The Yakima County, Washington specimens were collected at bait.