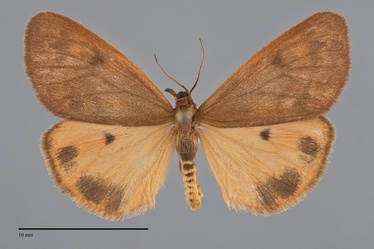 Virbia ferruginosa is a small (FW length 12 - 15 mm), rusty, broad-winged and slender-bodied moth found in eastern and central British Columbia in the Pacific Northwest. The forewings, head, and thorax are similar light to medium-dark rusty brown. The forewing appears nearly homogeneous, with diffuse and faint dark discal spot and transverse lines. Some specimens, particularly females, have one or more light yellow spots in the posterior median area. The hindwing is light orange to orange red. The extend of the hindwing markings is variable, with most specimens showing a dark gray discal spot, a blotchy fairly wide incomplete marginal band, and a dark fringe. Specimens with an immaculate hindwing or solid marginal band occur. The abdomen color matches the hindwings and is marked with lines of black spots. Females are slightly smaller and more vividly colored than males. The simple antennae are dark.

Many similar Virbia species occur in eastern North America. Our species is unlikely to be confused with moths in our region.

This is a northern species of moist woodlands and meadows that extends across Canada to the northern Rocky Mountains. It is found on prairies and bogs in the Peace River District of British Columbia.

Virbia ferruginosa is found in the eastern half of British Columbia as far north as the Peace River in the Pacific Northwest. It has not been found in the United States west of the Dakotas.

This species occurs across the Canadian Prairie Provinces to the East Coast where it ranges from Nova Scotia to Connecticut.

Adults are both diurnal and nocturnal. They have a relatively slow flight and are not difficult to net. They come to lights. Resting moths fold their wings back nearly vertically to produce a narrow triangular profile.

Pacific Northwest records are from June and July.