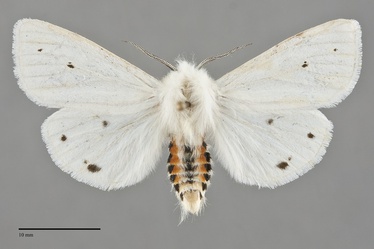 Spilosoma virginica is a medium-sized moth (FW 19 - 25 mm) with pure white wings marked with a few black dots. The forewing spots are usually limited to one near the inferolateral cell and one near the wing margin opposite the cell. The hindwing is more heavily spotted, usually a row in the marginal area in addition to a discal dot. The head and thorax are white, the anterior legs are yellow and black, and the other legs are black and white. The abdomen is characteristically white and yellow with several rows of black dots arranged in longitudinal rows. The antennae are bipectinate, wider in males than females, white dorsally, and black ventrally.

S. virginica can be told from all other moths with white forewings and hindwings by the striped white, yellow, and black abdomen.

Larva is yellow and densely covered with yellow-orange and white hairs.  It is illustrated by Miller & Hammond (2003).

This species is common to abundant at lower elevations.  In the Pacific Northwest, it occupies coastal grasslands, coastal rainforests, mixed hardwood forests, and conifer forests west of the Cascades.  East of the Cascades, it uses moist hardwood forests and wet meadows in riparian zones along creeks, extending to disturbed agricultural and urban areas.

S. virginica is widely distributed at low elevations throughout the Pacific Northwest.

This species is widespread in temperate North America, occurring from coast to coast. In the west it occurs from north central British Columbia to central California.

This species is a generalist feeding on a wide variety of herbaceous plants and hardwood shrubs.

This species can be found from late spring until early fall. It comes readily to light and is commonly found at porch lights.