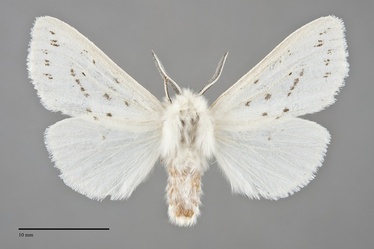 Spilosoma congrua is a predominantly eastern species that only occurs in the Pacific Northwest in south-central British Columbia. It is similar in size (FW length 17 - 22 mm) and general appearance to the more common Spilosoma virginica but its abdomen is white without the yellow and black marks of S. virginica. In addition, the forewing of S. congrua is usually more heavily spotted with gray to black along the veins. Dots are present along the postmedial and subterminal lines in most specimens, and some have additional dots along the antemedial and basal lines. In contrast the hindwing of S. congrua is immaculate. The femora and tibiae of the forelegs are yellow and black. The male antenna is bipectinate.

Hyphantria cunea is a similar white moth with yellow and black forelegs. It is also found in British Columbia. Compared to S. congura, it is slightly smaller and specimens from our area have immaculate white wings lacking gray or black spots (those from eastern North America can be more heavily marked). Spilosoma virginica, a very common and widespread Pacific Northwest moth, has yellow and black stripes on the abdomen which S. congrua lacks.

The habitat of S. congrua in the Pacific Northwest is not known precisely to us.  It is likely that it flies in mixed forest.

This species is limited to south-central British Columbia in our area.

The few Pacific Northwest records of this moth suggests that it flies from mid-May until mid-June.

The larva is reported to be a general feeder on herbaceous plants by Covell (1984).