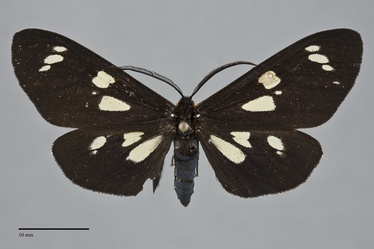 Gnophaela latipennis is a day-flying, large (FW length 26 mm), pale-spotted, black moth found in western and southern Oregon. The forewings are narrow with long rounded apices. Both fore- and hindwings appear black with few large translucent, greenish-yellow spots. The head and thorax are black with small white spots on the collar and wing bases, and the proximal forelegs are bright orange. The long black antennae are bipectinate, moreso in males than in females.

This species is only likely to be confused with Gnophaela vermiculata in the Pacific Northwest. G. vermiculata is found in forests outside western Oregon and has larger pale areas on both fore- and hindwings separated into cells by narrow black veins, rather than as discrete spots as in G. latipennis.

Larva is densely covered with hair tufts, color is black with lateral yellow patches.  It is illustrated by Miller & Hammond (2003).

This species is mostly found west of the Cascades in open mixed hardwood-conifer forests, oak woodlands, and in open riparian habitats near creeks.  On the east side of the Cascades, it occurs in open ponderosa pine forests and mountain meadows.  It can be locally common, but colonies are sporadic and widely disjunct in close association with the larval foodplant.

Gnophaela latipennis is restricted to Oregon and California. California records are from forested areas of the northern and middle part of the state.

This species is restricted to forested areas of western and south-central Oregon.

This species is a foodplant specialist feeding on hound`s tongue (Cynoglossum spp.) in the Boraginaceae.

Adults are diurnal. They have been found