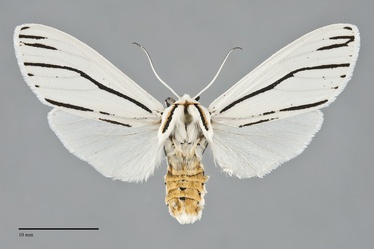 Ectypia clio is a medium-sized (FW length 15 - 20 mm), white moth with a few longitudinal black veins producing a streaked appearance to the forewing. The black marks are longest along the cubital vein continued to the outer margin on M3 and on vein 1A+2A at the posterior margin. The lines limited to the distal veins near the outer margin elsewhere, strongest at the apex. The hindwings are pure white or pure white with small black dots on the veins at the wing margin. The head and dorsal antennae are white. The dorsal thorax is white with ochre and black lines on the collar and tegulae. The abdomen is ochre dorsally and white ventrally, with a series of black dots in the dorsal midline and along each side.

No other moths are likely to be confused with this distinctive species.

Larva is black and densely covered with long yellow-white hairs.  It is illustrated by Powell & Opler (2009).

This species is widely distributed in southwestern North America in lowland habitats along creeks, rivers, agricultural areas, and even urban areas.

E. clio is limited to southwestern Oregon in the Pacific Northwest. It also occurs in northern Utah just south of the Idaho border.

This species is distributed in California and the Southwest to the western portions of Nebraska and Texas.. It is widely distributed in Arizona, Utah, New Mexico, and Colorado.

This species feeds on milkweeds (Asclepias spp.), but little information is presently available regarding the possible range of larval foodplants.

Pacific Northwest records are from late spring until early August. It is nocturnal and comes to light.