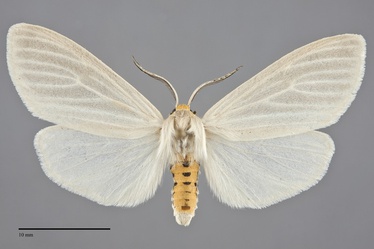 Cycnia oregonensis is a pale, medium-sized (FW length 17–21 mm) tiger moth with a black and yellow abdomen. The forewing is usually dark cream with paler veins and no other markings. The unmarked hindwings are paler off-white in most of the Pacific Northwest. The head is ochre-yellow, whereas the collar is the same color as the forewings. The dorsal abdomen is bright ochre-yellow (except for white at the tip) with several rows of black spots. The antenna is bipectinate, broadest in males.

This species has two subspecies in the Pacific Northwest. Most populations are the nominate subspecies. An isolated segregate on the Puget Prairies near Olympia, Washington differs from other populations in having gray, rather than cream-colored, wings and was described recently as C. o. tristis Crabo.

This species is most likely to be confused with Cycnia tenera. The forewing of C. tenera differs from that of C. oregonensis in having a yellow costal margin and gray shading, especially on the underside.

C. oregonensis is widely distributed in the Pacific Northwest. Most records are from east of the Cascade Mountains as far north as south central British Columbia. It occurs in wetter habitats in arid lands but appears to be absent from the driest interior regions. There are fewer records from west of the Cascades, mostly in western Oregon. An isolated population occurs in the Puget Trough on glacial outwash prairies in Thurston County.

This species is found in a large part of North America. It is common in the east from Nova Scotia to North Carolina. Its range extends across the Great Plains to southern British Columbia and central California. There are fewer western than eastern records, but Ferguson et al. shows this moth from all western states except North Dakota.

This species is a foodplant specialist feeding on dogbane (Apocynum spp.).

Cycnia oregonensis has a long flight season from late spring until mid August. Most records are from June until early August. It is nocturnal and comes to light.