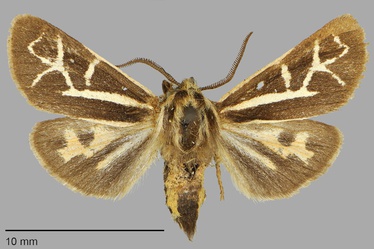 Apantesis margo is an uncommon, small (FW length 11–13 mm), day-flying tiger moth found only in the Peace River region of northeastern British Columbia in our region. It has relatively narrow forewings with limited pale markings, usually the median, postmedial, and zigzag subterminal lines and the horizontal subcubital line. The hindwing is dull yellow to orange-yellow with extensive dark gray markings, usually fused to encircle the wing margins with a separate discal spot. The thorax is mostly black, with pale edges on the tegulae. The antennae are bipectinate in males and biserrate in females.

This species is most likely to be confused with pale-hindwing individuals of Apantesis williamsii, a species with which it occurs in Alberta and British Columbia. In A. margo the postcubital pale line does not extend toward the wing margin as it does in most specimens of A. williamsii. These species differ in several structural characters, including smaller eyes, narrower male antennae, and narrower forewings in A. margo. Also, A. margo is diurnal wheras A. willamsii flies at night. Apantesis margo also resembles A. elongata, but these species can usually be distinguished by collecting locale since A. elongata flies at high subalpine to alpine localities later in the year.

This species has been found in grassland habitats, often with sandy or gravelly soil.

Apantesis margo is only known from the vicinity of the Peace River in northeastern British Columbia in our region.

This species has a fairly broad distribution in the plains and mountains of central North America. Most records are from Alberta, possibly reflecting the high interests in moth in this province, with scattered records from southwestern Manitoba, northern Colorado, and eastern Arizona.

No information is presently available regarding larval foodplants of this species, but it probably feeds on herbaceous vegetation based on related species.

The adults of A. margo are strictly diurnal. They have a rapid buzzing flight and are difficult to catch.  The few records from our region are from late May and early June.