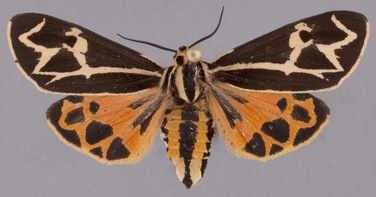 The reduced white lines on the forewing are not found in other Apantesis species from the southern Oregon or California Cascades. In the latest revision of these moths Schmidt (2009) suggests that A. bolanderi is most likely to be confused with Apantesis williamsii and Apantesis blakei, found farther east in the Rocky Mountains and Great Plains. The most common species in its range are Apantesis ornata and Apantesis nevadensis, both of which have more white lines on the forewings and more heavily spotted hindwings than A. bolanderi.

The early stages of A. bolanderi are unknown.

The habitat of this moth is poorly known. The illustrated female was found in a sedge meadow at the edge of Klamath Marsh.

The only Pacific Northwest specimen was found at Klamath Marsh in Klamath County, Oregon.

As noted above, the only other specimen of this moth is from "Mt. Shasta" in the northern California Cascade Mountains.

The Oregon specimen was collected during the day on July 8. Many Apantesis females are diurnal, including some of species with nocturnal males. The extreme rarity of this moth in collections suggests that one or more features of its biology or behavior causes it to elude detection and capture. Possibilities include diurnal flight of both sexes, non-attraction to light, or seldom-collected habitat.